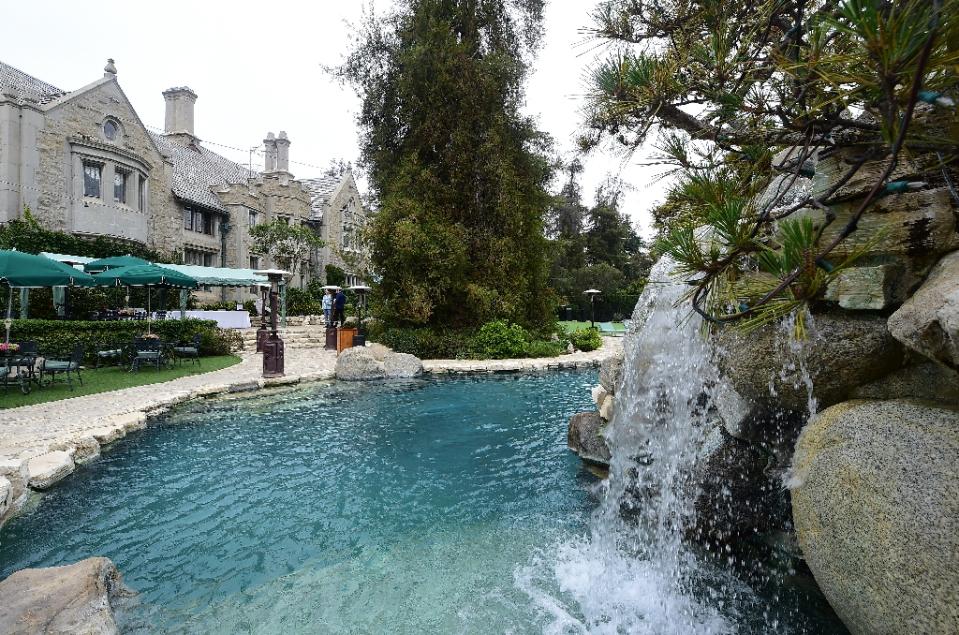 Playboy’s move to the mainstream comes with the parent company on sale at an estimated $500 million and the mansion itself also on the market. Photo by AFP

LOS ANGELES: It is the legendary party house where John Lennon burned a Matisse original with a cigarette and Elvis reportedly slept with numerous models, but the Playboy Mansion is a more sedate place these days.

The only women to be seen on its verdant lawns are PR staff in smart suits while the frollicking among the bushes is left to a menagerie of peacocks and parrots kept at the $200 million Beverly Hills estate.

Once emblematic of Hollywood’s excess, the 12-bedroom property’s more business-like ambience is in keeping with the “safe for work” direction the magazine took when it dropped full-frontal nudity in favor of a more “millenial-friendly” ethos.

“The political and sexual climate of 1953, the year Hugh Hefner introduced Playboy to the world, bears almost no resemblance to today,” Scott Flanders, chief executive of Playboy Enterprises, said ahead of the magazine’s March relaunch.

Eugena Washington, the magazine’s latest cover girl and the first Playmate of the Year in the new, sanitized era, last appeared in December, when full-frontal nudity was still de rigeur.

“I think non-nude is a great stepping stone in the right direction… The fact is we’re going to be more accessible. We’re going to have a whole new demographic. It’s a brave new world,” she told AFP.

The magazine went full-frontal around the time Hefner bought the Playboy Mansion for $1 million in 1971, introducing its infamous pool parties and a lingerie-only dress code for the female guests who cavorted in the infamous caved grotto.

A Matisse original taken down and burned with a cigarette by John Lennon hangs to this day near the off-limits “Elvis room” of urban legend, where the singer once reportedly slept with eight Playmates at once.

The estate still holds regular parties but Washington, who went to the last Halloween bash, says the excesses of its glamorous past appear to have been toned down.

“I didn’t catch anybody in the grotto. It was real PG-13 but super, super fun,” she told AFP.

Playboy’s move to the mainstream comes with the parent company on sale at an estimated $500 million and the mansion itself also on the market, with the proviso that 90-year-old Hefner be allowed to stay on.

Circulation, which peaked in 1972 at seven million, stands at around 800,000, according to editorial director Jason Burhmester, who says Hefner still signs off on every page as the official editor-in-chief.

“He doesn’t necessarily read every word and edit stories but we send all the lay-outs up to him twice a week to review,” Burhmester told AFP in an interview at the Playboy Mansion.

“He likes to know what’s going on, go through photos and stuff and maybe make a change here or there. It’s tough to argue with the most successful magazine editor in history.”

The move to “Facebook-friendly” online content that users aren’t afraid to share on social media led to an immediate 400 percent leap in monthly unique visitors to Playboy.com, with average age falling from from 47 to a more advertiser-friendly 30.

The magazine has its work cut out to follow that success, with recent reports suggesting it is losing $6 million a year in the US, albeit offset by licensing fees from dozens of international editions.

The relaunch wasn’t Hefner’s idea and it has divided the family, with the magnate’s 63-year-old daughter Christie ardently in favor and his son Cooper, 24, criticizing the decision and complaining of being sidelined.

“I know he’s getting old but I didn’t know he’d lost his mind,” Larry Flynt, of the rival Hustler empire, told CNN upon learning of Hefner agreeing to less nudity.

Playboy insists there is reason for optimism, reporting increased advertising from the likes of Dodge — its first deal with a Detroit car manufacturer — and nearly 1,200 retail locations carrying the magazine for the first time.

“At the end of the day, Hef will tell you he’s very much a romantic and it was never about explicit nudity. It was always about the suggestiveness, the romanticicsm, the girl next door,” says Burhmester. – AFP