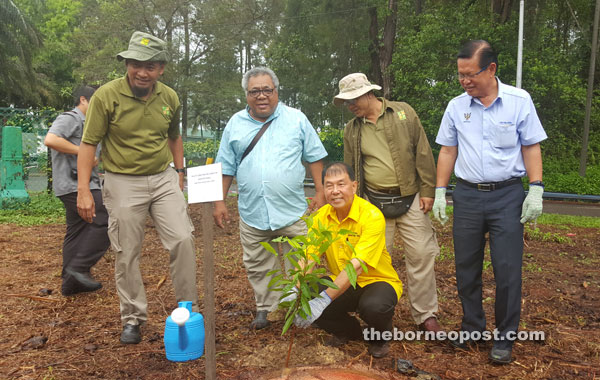 Ting (squatting) planting a tree as other VIPs look on.

MIRI: Sarawak Tourism Board (STB), the organiser of the Borneo Jazz Festival, held a tree planting ceremony at Piasau Nature Reserve (PNR) yesterday to enhance its campaign to help preserve, protect and conserve the environment to make the state’s tourism industry sustainable.

Among the other participants were performers of the Borneo Jazz Festival 2016, staff of Sarawak Shell, government officials, hoteliers, volunteers and media personnel.

A total of 60 tree seedlings indigenous to Sarawak, namely ranggu/sentang, bungkang and kasai, were planted in support of the conservation of PNR to provide food for the animals including totally protected hornbills.

Lee in his speech commended STB for organising the greening programme, which augured well in supporting efforts to make PNR a premier tourism product for Miri.

“We targeted to make this nature reserve an iconic urban park in the country and the tree planting event held today augured well.

“We hope that the rich flora and fauna here including its hornbills – totally protected species of birds – could become important tourist attractions,” he said.

Lee suggested that more environment related seminars and conferences be held at the nature reserve once facilities are available, to further create greater awareness of environmental protection and appreciation.

Jonathan who also spoke assured of Shell’s continued support for PNR, adding that being one of the stakeholders Shell was committed to see the success of the development of PNR and Miri City in particular.

“In relation to this tree planting, we all have a responsibility to protect the rights of generations of all species that cannot speak for themselves today,” he said.

On the development of PNR, Jonathan said all demolition activities had been completed and the area is now within the ambit and management of SFC.

PNR formerly called Piasau Camp, a residential area for Shell staff, was gazetted as nature reserve in 2014. Among other things, it is for the conservation of hornbills and other species of wildlife.

Meanwhile, the two-night Borneo Jazz festival begins tonight. A total of eight local and international bands will be performing. They are the Raw Earth from Singapore, Klazz Brothers and Cuba Percussion from Germany/Cuba, Yuichiro Tokuda’s Ralyzzdig from Japan, Manou Gallo Groove Orchestra from Belgium and Ivory Coast and O Sister! from Spain.

Also joining in will be Funkatorie from Malaysia, A.P.I from Malaysia and India and the Rad Trads from New York, USA.

Tickets are available at the entrance of the festival venue at RM180 for an adult two-day entry, RM100 for a single entrance and a family package of two adults and two children at RM200 from 4pm onwards today and tomorrow (May 13 and 14).

Front row from sixth left: Jonathan, Ting, Antonio, Lee and Ik in a photo call with participants of the tree planting event.