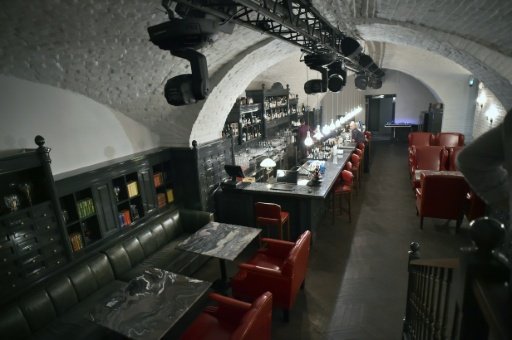 Moscow’s legendary Aragvi restaurant, once the favoured dinner destination for KGB spies and cosmonauts, has reopened. Photo by AFP

MOSCOW: Moscow’s Aragvi restaurant, once the legendary haunt of KGB spies and cosmonauts, has reopened with its Soviet-era grandeur restored.

The high-end eatery on the main Tverskaya street, which opened in 1938 at the height of Stalin’s purges, has relaunched under the same name after a $20 million (17 million euros) restoration.

The restaurant opened on the initiative of Stalin’s notorious security chief Lavrenty Beria for the use of officials from his NKVD agency, the Soviet secret service later renamed the KGB.

It grew popular with other officials and later in the 1960s under Nikita Khrushchev, in the so-called “Thaw” period when censorship and repression eased, lured a more bohemian crowd of artists and actors.

Aragvi was immortalised in Soviet literature and featured in films, although its sky-high prices made it accessible only to a tiny elite.

Diners had to pay a tenth of the average monthly wage for the privilege of eating alongside artists, cosmonauts, filmmakers and chess champions.

“In the Soviet Union, dropping a mention of the famous Aragvi chicken — which was grilled with nuts and garlic — gained you entry into the creme de la creme of society,” said one former diner, Nelli Maximova, an 83-year-old retired translator.

“And it was really delicious, their chicken.”

In 1943, poet Sergei Mikhalkov was in the restaurant when he came up with the idea of writing the lyrics for the new Soviet national anthem, praising Stalin for inspiring “great deeds.”

After the fall of the Soviet Union in 1991, the state-owned restaurant was privatised and changed hands several times, but it rapidly lost its cachet and finally closed down in 2003.

Its new owners, Tashir group and Gor Nakhapetyan, who previously led the Troika Dialog investment group, have spent more than $20 million restoring the restaurant, saying they want to revive a Soviet legend.

“Of course we wanted to revive nostalgia for a bygone era,” Nakhapetian, who grew up in ex-Soviet Armenia, told AFP.

The new menu includes the classic Georgian dishes that made its reputation such as khinkali (dumplings full of meat and bouillon) and khachapuri, bread topped with cheese, as well as non-Georgian specialities such as borscht and Black Sea herring pate.

Hearty Georgian fare from a region wedged between Europe, Russia, Asia and the Middle East, is hugely popular in Russia, although it is usually more affordable than in Aragvi.

The restaurant, named after a Georgian river, is located inside a former hotel where Leo Tolstoy and Anton Chekhov once stayed.

Its main dining rooms are painted in the grand Soviet manner, with sheaves of corn, tractors and beaming workers, particularly the room once reserved for the use of Beria.

In the Stalin era, the restaurant had its most important ingredients, particularly those for its famous “satsivi” or cold chicken in nut sauce, delivered in a special train carriage from Tbilisi.

Under Stalin, an ethnic Georgian, “Georgian food was served at the Kremlin and was seen as the cuisine of the Soviet ‘tsars’,” said Leonid Parfyonov, a television host who has written numerous books about everyday life in the Soviet Union.

Even after Stalin’s death, “in the context of the bleak Soviet culinary scene, the Georgian tradition of wines and spices brought a breath of joie de vivre, and Aragvi was a symbol of Soviet chic,” Parfyonov said.

Yet Aragvi also had a more sinister side.

It was a hangout for KGB officers who used it as a spot to recruit agents and its dining rooms were wired up with hidden microphones.

“For the KGB, Aragvi was always the favourite place to recruit agents and for farewell parties for agents going abroad,” said Mikhail Lyubimov, who long headed the KGB’s operations against Britain and Scandinavian countries and is now a writer.

In 1960, he recalled his KGB boss sent him to Aragvi to informally meet the new number two of his department.

On another evening “with plenty of drinking, one of our men invited a beautiful woman to dance, not realising she herself was a US spy and was being tailed by the KGB,” he said, laughing.

“The front-of-house staff there were mainly retired KGB officers — and the food was sublime,” Lyubimov said.

In the reopened restaurant, the guestbook is full of nostalgic messages, with diners appealing: “Bring back the old recipes” and “Marinade the meat like you used to do.”

Marina Dolgikh, a 49-year-old lawyer, leafed through the menu, saying that she had popped in out of curiosity since she knew of the original restaurant.

“In its time, Aragvi was inaccessible to me,” she said, adding glumly after looking at the prices: “And it’s still out of my budget.” – AFP