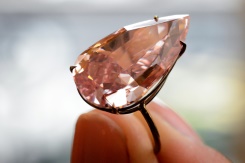 A model shows the “Unique Pink”, a vivid pink diamond weighing 15.38 carats, during a press preview at Sotheby’s auction house on May 9, 2016 in Geneva. Photo by AFP

GENEVA: A 15.38-carat vivid pink diamond, the biggest of its kind to go on auction, was sold for a new record total of $31.56 million (27.88 million euros), Sotheby’s auction house said Tuesday.

Two telephone bidders battled for the prized jewel before some 150 people attending the auction held at a luxurious hotel in Geneva.

He added only that the buyer was a private individual from Asia.

Sotheby’s had valued the “exceptional” pear-shaped diamond, mounted on a ring, at between $28-38 million.

It was discovered less than five years ago in a South African mine. The seller was the New York-based company Cora International.

The stone with the name “Unique Pink” was certified a fancy vivid pink diamond, the most sought after colour in pink diamonds, by the Gemmological Institute of America.

On Wednesday the magnificent spring jewel auctions continue in Geneva with what Christie’s says is the biggest ever vivid blue diamond to go on the auction block.

The jewel belonged to Britain’s Sir Philip Oppenheimer (1911-1995), a kingpin in the world diamond market for nearly 50 years at De Beers. – AFP