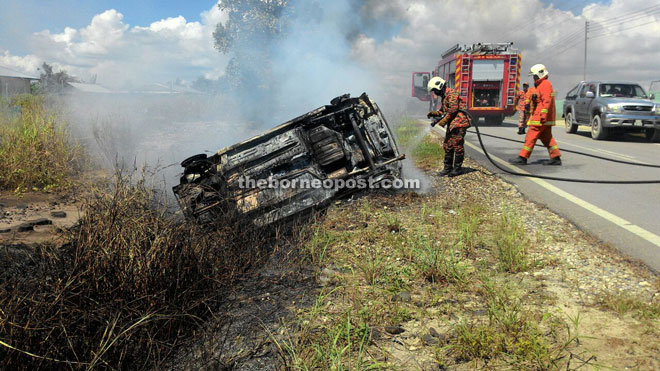 Firemen make sure the flame is completely put out.

MIRI: An 18 year-old boy survives an accident after the car he was driving burst into flames yesterday afternoon.

It is said that prior to the incident, the boy was on his way to the city centre when the car suddenly veered off the road and turned on its side by the road shoulder before it burst into flames.

The incident happened at Kampung Lusut in Taman Tunku at 2.45pm.

He was immediately taken to Miri Hospital for outpatient treatment.

Fire and rescue personnel were mobilised to the scene after receiving an emergency call.

In a separate incident also yesterday, three female siblings in their late 50s cheated death after a four wheel drive (4WD) vehicle they were travelling in was involved in a collision with a car coming from the opposite direction at Miri by-pass road.

It is understood that they were on their way to Pujut bus terminal when the collision happened.

The 4WD vehicle landed on its side in the middle of the road.

The three siblings were sent to the hospital while the driver of the other car suffered slight injures.