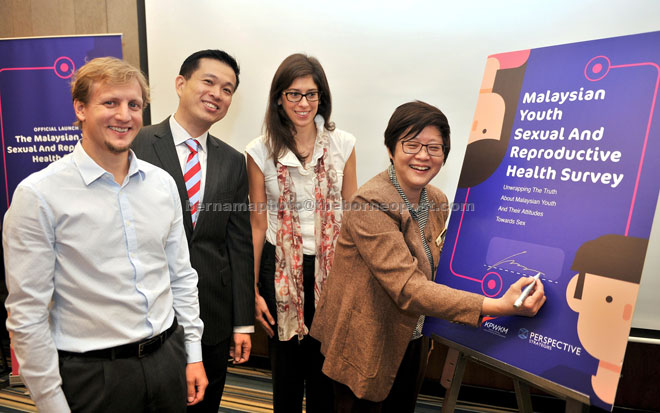 KUALA LUMPUR: Knowledge on sexual and reproductive health (SRH) among Malaysian adolescents remains low and they remain ignorant on the many aspects of sex and pregnancy.

A survey conducted by Perspective Strategies Sdn Bhd on 1,071 respondents between the ages of 18-29 from different races and throughout the country noted that greater number of female respondents lacked knowledge of bodily functions to make responsible choices.

exposed to sexually transmitted infections (STIs) out of fear of being ostracised, believing it was ‘shameful’.

Minister of Women, Family and Community Development Datin Paduka Chew Mei Fun who was present at the unveiling of the outcome of the study said the issue of SRH could no longer be cast aside and should be widely discussed as such were affecting adolescents in the country.

“Many young people are oblivious to SRH related issues based on the National Population and Family Development Board (LPPKN)’s own study, for instance only 39.5 per cent have knowledge of how a baby is born and 45.5 per cent know what a womb is.

“LPPKN’s findings revealed that 4.8 per cent of Malaysians between the ages of 13-24 had sexual intercourse while more than one third (35.3 per cent) are exposed to pornography mainly through the internet (60.8 per cent),” she said.

While the subject of sexual and reproductive health is still a taboo, there is no denying that adolescents sometimes even as young as 10 are having sex and thus parents have to play a vital role in educating their children on sexual health.

With this being a priority, Chew during her speech said LPPKN introduced a program called [email protected] that would look into parenting as the core, with greater focus on supporting families as a whole rather than focusing primarily on adolescents. — Bernama