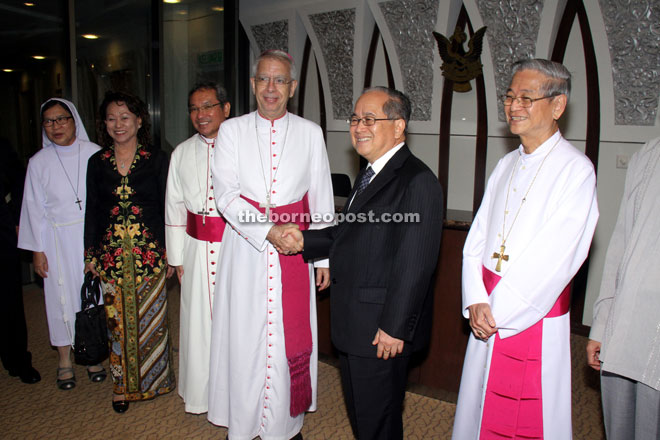 Uggah (second right) shakes hands with Marino during a photocall. Ha is at right. — Photo by Chimon Upon

Masao Kusunoki, representative director chairperson of Tokuyama Corporation, said a stable Sarawak government was what the Japanese corporationn was looking forward to doing business with.

“The main objective of my visit here is to convey my congratulations to Chief Minister Datuk Patinggi Tan Sri) Adenan Satem for the BN landslide victory.

“To us, this means a stable Sarawak government conducive to business and for Tokuyama Malaysia,” he said when met by journalists after paying a courtesy call on Deputy Chief Minister Datuk Amar Douglas Uggah Embas at his office here yesterday.

Uggah said these visitors had extended their congratulations for the victory of BN in the state election.

“For Tokuyama, it’s good news to them because it means Sarawak’s stability and they know the policy of the present state government is friendly to foreign investors.”

Uggah hoped they would go home and share the stories with their countrymen.

To a question, he said Kusunoki raised some issues pertaining to the plant Tokuyama had set up in Bintulu.

“I cannot reveal to you the issues here. I will have to pass it to the chief minister. It is about their business in Bintulu where they have a plant. So they’re briefing on the direction, the way forward.”

Uggah said he had a general discussion with the ambassador from Vatican.

He added the Roman Catholic diplomat was very impressed with the harmony in Sarawak.

“He understands the policies of the state government and he was very appreciative for this. I also explained to him our stand, like the use of the word ‘Allah’ which Sarawak is allowed to use.

“Other issues, like for example, the Rooney Rebit’s case where the chief minister personally intervened that the case did not have to be appealled.”

Early this month, Adenan stepped in to make sure that the National Registration Department (NRD) withdraw its notice of appeal against the Kuching High Court’s decision to recognise Bidayuh Rooney’s right to be legally known as a Christian.