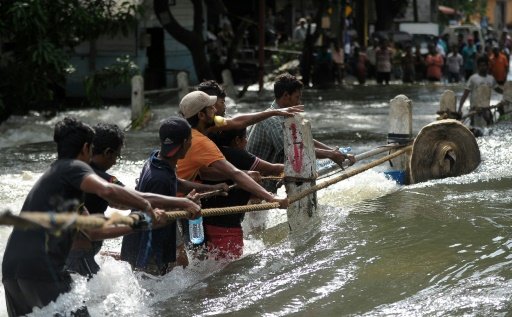 Sri Lankans cross a torrent of floodwaters in Kelaniya, on the outskirts of Colombo on May 21, 2016. Photo by AFP

COLOMBO: Sri Lankan soldiers pulled more bodies from landslides and distributed food and water to hundreds of thousands of residents camped in shelters on Sunday after major floods hit the island.

Floodwaters were receding in the capital Colombo after the heaviest rains in a quarter of a century pounded the island since last weekend, triggering landslides that have buried victims in tonnes of mud.

Soldiers and other rescuers discovered 13 more bodies late on Saturday in the worst-hit district of Kegalle, about 100 kilometres (60 miles) northeast of Colombo, where two villages were destroyed last week.

More than 80 people are known to have died so far across the island amid fears the number could rise — with 118 people still listed as missing.

“The search will continue for some more time even though we have not found anyone alive during these search operations,” Disaster Management Centre spokesman Pradeep Kodippili said of the landslides in Kegalle, where a total of 48 bodies have been found.

Sri Lanka was receiving international aid for more than half a million people forced to flee their homes across the island.

After bursting its banks last week, the Kelani river running through Colombo was receding slowly. But some 200,000 people living in low-lying areas of the capital were still unable to return home, he said.

“The next big challenge is the clean-up operation, but it can start only in a few days when the waters go down completely.”

Rain has eased since Cyclone Roanu moved away from Sri Lanka to hit southern Bangladesh overnight, leaving at least 24 people dead there before weakening.

President Maithripala Sirisena has called on Sri Lankans to provide shelter and give cash or essential supplies to its flood victims.