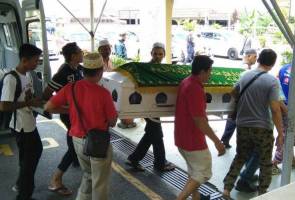 KUALA LUMPUR: Former national cyclist, N.A. Rosli, 77, who had represented Malaysia at the 1964 Olympic Games in Tokyo, Japan, was killed in a suspected hit-and run accident here this morning.

According to his son, Nor Effendy Rosli, his father was riding a motorcycle when it was involved in an accident in Jalan Kuchai Lama here at about 7 am.

“We have not been briefed about the accident as the police are still investigating it..it could be a hit-and-run.

“Father lived with my younger brother at the Muhibbah People’s Housing Project in Old Klang Road.

“Maybe he was visiting my mother’s grave at the Taman Keramat AU2 Muslim Cemetery or going to his farm in Puchong (when the mishap took place), it is his only routine on weekends,” he said when contacted by Bernama.

He said the prayers would be conducted at the Al-Ansar Mosque, AU2 here before the funeral at the Taman Keramat AU2 Muslim Cemetery after the Zohor prayers. Rosli leaves behind five sons and three daughters.

The 1964 Olympic Games was the first time Malaysia took part in the Games al after the formation of Malaysia involving the Federation of Malaya, Sabah and Sarawak, and also, Singapore (pulled out of the federation in 1965). Sixty six athletes represented Malaysia at that time.

“We were good friends for more than 54 years, from my first involvement in the sport. He was very dedicated and active.

“I am very sad over his death,” said the 69-year-old former ace. – Bernama