Tuesday, August 3
You are at:Home»News»Sarawak»Four sectors identified in effort to find AS350 helicopter 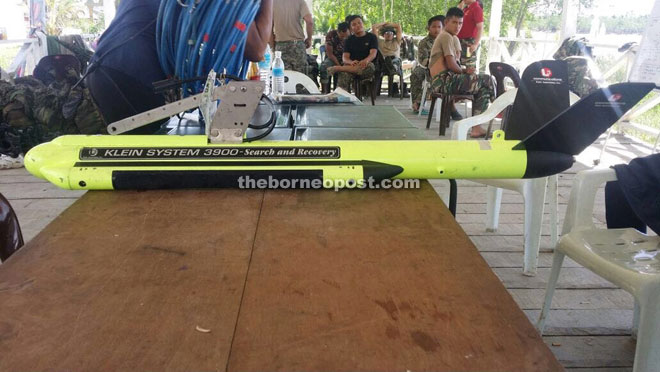 The side scan sonar device used in the search for the helicopter wreckage.

KUALA LUMPUR: Four sectors have been identified to find the wreckage of the AS350 helicopter which crashed in Sungai Batang Lupar, Sebuyau, Sarawak killing six people early this month.

RMN chief Admiral Datuk Seri Ahmad Kamarulzaman Ahmad Badaruddin said the main focus of the search is in Sector A, a 42-square-kilometre area near Lingga.

“Following discussions between the agencies involved, the search is focused in Sector A where three victims and debris from the wreckage were found.

“The operation which started on Wednesday (May 18) is expected to take 10 to 14 days using a sonar device,” he told Bernama.

Meanwhile, he said RMN would use the high resolution Side Scan Sonar – Klein 3900 which could operate at a frequency of 900 kHz or 445 kHz to show the image of the bottom of the river.

He said the main challenges being faced by the search team were the vast search area, strong currents, murky water and crocodiles.

In the tragedy on May 5, the helicopter was believed to have crashed in Sungai Batang Lupar, Sebuyau.

The bodies of the six victims of the incident on May 5 were found.