Friday, June 25
You are at:Home»Columns»Perspective»Zonking out in China 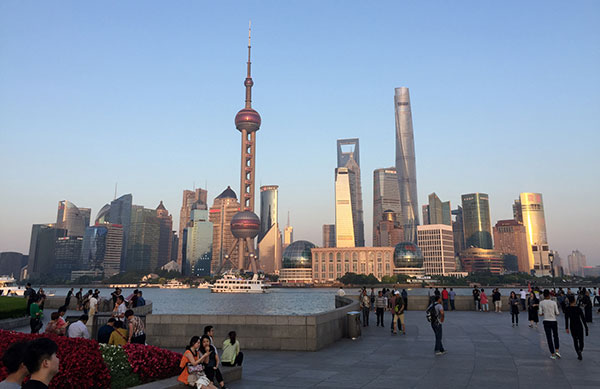 AFTER being punch-drunk due to the election campaign speeches – the rhetoric, the grandiose promises and outright mudslinging – I had enough. I wanted to look for a place where I could put my brain on pause, where I could just sit back and watch life and the scenery glide by. So I booked a package tour of China, starting from the metropolis Shanghai and ending at the legendary Hwangshan (Yellow Mountain), the inspiration of many an iconic Chinese painting of mountains in the clouds.

I must confess that I was a bit apprehensive about the trip, having seen so many negative comments about China on the Internet. However, having ‘survived’ a jaunt through a small part of this great country, I must say that views of the naysayers are unduly exaggerated. However, I am not going to gloss over some of the areas for improvement that Chinese nationals have to work on.

My friend, funnyman Stephen Fernando, has this joke. “I went to China last year. I am really impressed by this country and I love the place but the problem is that there are too many Chinese.” My initial impression upon hearing that joke was that it was somewhat racist. But from my experience, I must say that Stephen was not far off the mark.

Firstly, China is a big place. The emphasis is on big. I am not much into statistics but the fact is that it is a continent. I think you can fit the whole of Europe into that country. Though united as a nation for millennia, we need to keep in mind that it is also culturally varied. In fact there are more Muslims in China than the total population of Malaysia.

I first went to China in 1991 and have visited the country nearly 10 times since. What impressed me are the development and improvements, and the rate of them. Someone once said, “Having gone through a tumultuous history, both ancient and modern, the Chinese people are pulling themselves up by the bootstraps.” I agree. It was dubbed, not too long ago, as ‘the sick man of Asia’ and now it is regarded as a superpower, much envied and feared by the other superpower, the USA.

Twenty-five years ago, one of the greatest concerns for visitors was toilets or the lack of. It was so bad that it seemed to be the only thing that visitors of yore would talk about. One had to be very brave and very desperate to dare to get near one. I remember when we came to one of the pit stops, we would send one of the more intrepid companions to do a recce (this is contraction of the military term reconnaissance, meaning to gather information about the enemy, now heavily used by the media production industry). If the scout came back with a hint of a smile, the whole coach-load would be relieved. However, if he or she came back looking distraught and pale, then we had to seriously think of alternative means of easing ourselves. I recall at one place (wait a minute, I think it was more than one place) the scout was so distressed that we took to the bushes.

You might wonder why I am dwelling on something so basic. Well, I believe that the state of a country’s public toilets is a good measure of a country’s development. China has improved so much in that department that we now can dispense with the service of a person to do the recce.

Twenty-five years ago, we went to visit my wife’s ancestral home at a clan village – a village of over 1,000 families, all of the same surname. We chartered a taxi from Xiamen. When we told the driver where we wanted to go he asked, “Are you sure you can reach the place by car?” I did not quite understand the question. Anyway, it took nearly half a day to get to the village. A few years ago we made the same journey. It was a breeze, zooming along a highway in just over an hour.

Like my comedian friend Stephen, I was impressed with this big country. I was impressed by its long history. It evokes a special feeling to realise that the restaurant one dines in has been in existence over 1,000 years, like the one in a garden in Hangzhuo. I was impressed by the many well-kept beautiful public gardens; by tree-lined bicycle and electric bikes lanes and pedestrian walkways; by the spanking new buildings.

There is a Chinese legend about the foolish old man Yu Gong, who moved a mountain because it was an impediment to communication with the neighbouring region. He did not like the mountains blocking his way and making him go up and down or around the mountains when he left home. And he did it with his bare hands and a hoe. Now the modern Chinese are equipped with bulldozers and other heavy machinery and they are changing the landscape with frightening speed – building the tallest buildings, fastest trains, biggest sports stadia, etc.

Once in Beijing we wanted to go to a popular flea market. The taxi driver insisted that there was no such place. We insisted that there was. My daughter, who was living in Beijing at that time, said that she was there just a few weeks prior. When we got there it was just open flat ground. The bulldozers had done their job to make way for a new hotel. I think my Mandarin was not up to par. The taxi driver was saying, “there is no such place NOW.”

Now comes the rub, the apparently racist remark by my friend Stephen, “… the problem is there are too many Chinese”. The Chinese have a term, “Ren san, ren hai” that literally means “people mountain, people sea”. And they are not kidding. Now the thing about water (in relation to the term “people sea”) is that it can come quite suddenly. My party was having a quiet lunch in a very nice restaurant by the water. We were just into the second course when this flood of humanity came pouring in through the doors. Well, so much for our quiet lunch. With the crowd came the noise. There is a way that they talk – it is loud. They can reach a volume that would put any toastmaster (the toastmasters pride themselves as being great speakers) to shame. They have this special way of generating their voices from deep down in the stomach and expel the air with great “chi”.

At the lunch we could hardly hear ourselves think. Just when I thought it could not get any worse, someone spotted a karaoke machine on the stage and turned it on. We had to retreat to a private room and had to pay a premium for it.

I believe it is not a racial thing, this rather crass behaviour. I think the pace of development is so fast that the people have not yet caught up with it mentally. Just a few decades ago, many of them were still tilling their lands with basic tools, just like our relatives at the clan village.

I had a good pair of headphones, a good computer notebook and my smartphone. I was able to zonk out and just indulge in “zou ma kan hua” literally, “ride horse look flowers”, meaning to give something a cursory glance. It was a pleasant trip.