Monday, February 17
You are at:Home»World»Solar Impulse 2 plane lands in Dayton 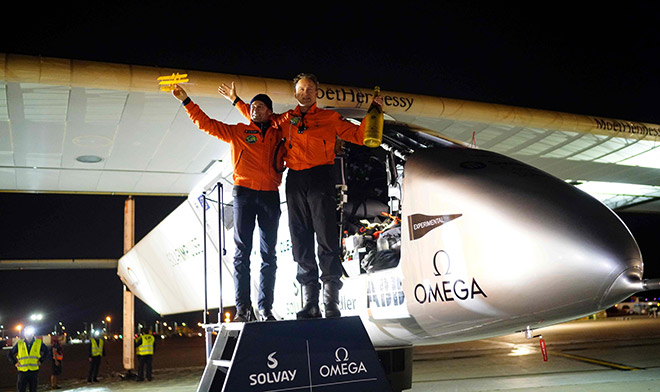 Solar Impulse 2 shows Swiss founders and pilots Bertrand Piccard (left) and André Borschberg (right) with the experimental solar-powered aircraft after landing in Dayton, Ohio. The solar-powered plane landed in Dayton, Ohio on the latest leg of a record-breaking trip to circle the globe without consuming a drop of fuel. — AFP photo

WASHINGTON: A solar-powered plane landed in Dayton, Ohio Saturday on the latest leg of a record-breaking trip to circle the globe without consuming a drop of fuel.

“Amazing to have landed in üDayton after being in the sky for 17 hours!” Borschberg tweeted.

The slow-moving, single-seat plane with the wingspan of a Boeing 747 cuts a flimsy figure, but it has traversed much of the globe in stages since taking off March 9, 2015 from Abu Dhabi.

The aircraft — clad in thousands of solar cells, the sole source of energy for the flight — reached its destination more than an hour ahead of schedule.

Still, travelling at average speeds of only 30 miles (48 kilometres) per hour, it took Solar Impulse 2 longer to reach Dayton than a car — the typical road trip from Tulsa is around 12 hours.

The flight to Dayton was the 12th leg of Solar Impulse’s projected 16-leg east-west circumnavigation, with Borschberg and Bertrand Piccard alternating as pilots.

Piccard, a Swiss psychiatrist and balloonist, initiated the project.

“The flight is part of the attempt to achieve the first ever Round-The-World Solar Flight, the goal of which is to demonstrate how modern clean technologies can achieve the impossible,” Piccard and Borschberg said in a statement.

Dayton is significant to aviation buffs because it is the home of Orville and Wilbur Wright, brothers who developed the world’s first successful powered aircraft heavier than air.

Solar Impulse 2 departed from Tulsa International Airport at 4:22 am (0922 GMT).

It may next fly to Pennsylvania as early as Tuesday, the team said. Its final destination in the United States is New York.

Thanks to an inflatable mobile hangar, which can be packed up quickly and transported, the plane can be sheltered at a variety of locations.

The aircraft was grounded in July when its batteries were damaged halfway through its 21,700-mile (35,000-kilometre) circumnavigation of the globe.

The crew took several months to repair the damage caused by high tropical temperatures during a 4,000-mile flight between Nagoya, Japan and Hawaii.

The plane was flown on that stage by Borschberg, whose 118-hour journey smashed the previous record of 76 hours and 45 minutes set by US adventurer Steve Fossett in 2006.

He took 20-minute catnaps to maintain control of the pioneering plane during the flight from Japan, in what his team described as “difficult” conditions.

The Solar Impulse 2, which weighs roughly the same as a family car, contains 17,000 solar cells that power the aircraft’s propellers and charge batteries.

At night, it runs on stored energy.

The plane’s typical flight speed can increase to double that when exposed to full sunlight.

After crossing the United States, the pilots are set to make a transatlantic flight to Europe, from where they plan to make their way back to their point of departure in Abu Dhabi.

Piccard, a doctor by training, completed the first non-stop balloon flight around the world in 1999.

His teammate Borschberg is no stranger to adventure — 15 years ago he narrowly escaped an avalanche, and in 2013 he survived a helicopter crash with just minor injuries. — AFP