Friday, July 10
You are at:Home»News»Sarawak»17 people made homeless after fire razes two houses 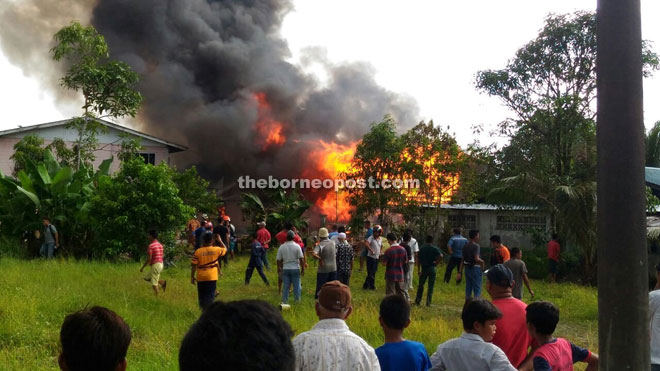 Neighbours gathering at the scene of the fire in Kampung Tupong Batu.

KUCHING: Seventeen people lost their home when two houses at Kampung Tupong Batu in Jalan Merdeka here were razed to the ground about 3pm yesterday.

According to Fire and Rescue Department (Bomba) Sarawak Operation Centre, 26 fire fighters from Batu Lintang and Petra Jaya rushed to the scene after they received a distress call from the public.

Due to the traffic jam the firemen needed police help to get to the fire scene.

The two double-storey houses were already 80 per cent damaged when the fire-fighters arrived.

They managed to control the situation at around 4pm.

No one was injured in the fire.

In an unrelated case, a lorry caught fire at Jalan Puncak Borneo about 11.30am yesterday.

The driver of the lorry used to ferry cement managed to escape after noticing smoke coming out from the engine section of the vehicle.

The front part of the vehicle was damaged due to the fire.

Firemen from Siburan were despatched to the scene.

The cause of the fire is being investigated and the estimated loss has not been ascertained.

Previous ArticleRM24.8 billion needed to build roads to over 1,000 rural villages by 2030 — Masing
Next Article Alarm over Russian interest