Saturday, August 13
You are at:Home»News»Sarawak»Ensuring safety of riverine passengers during Gawai rush 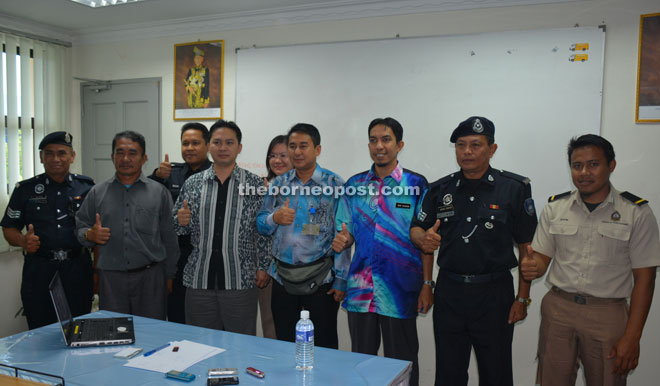 Mohd Marzuki (fourth right), (from fifth right) Bianus, Wan Sudiman and others gearing for the Gawai and school holidays operation.

SIBU: Stringent checks at passenger boat terminals and wharfs to curb overloading will be carried out as Gawai Dayak celebration draws near.

Marine Department Sarawak Region principal assistant director (Industrial Control Division) Mohd Marzuki Brahim warned that any boat failing to comply with the safety requirements would not be permitted to depart.

He said the department would deploy 16 personnel at Sibu Express Boat Terminal and another five in Kapit.

“We are working closely with the Marine Police, Sarawak Rivers Board (SRB), Malaysian Maritime Enforcement Agency (APMM) and others at the terminals.

“Besides checking at source, we are also mounting river blocks.

“Our monitoring will focus on passenger boats and ferry,” Mohd Marzuki told a press conference on their Gawai Dayak and school holiday operation here yesterday.

The integrated operation starts today till end of the mid-term school holiday.

On their enforcement activities, Mohd Marzuki disclosed they included checking for valid documentations such as boat licence and skipper’s competency certificate.

He assured such checks would be carried out for every trip, adding that river blocks would ensure skippers were competent.

“We want to ensure the skipper operating the boat is the same person having the competency certificate.”

As for safety equipment, he called on operators to ensure adequate number of life jackets and life buoys on board.

He urged skippers to reduce speed in rural areas when passing smaller boats like longboats as waves could affect the smaller crafts.

“Skippers too are to be watchful on the weather and to avoid travelling at times of poor visibility. Passengers should

plan their trips early to avoid the last-minute rush.”