Friday, August 19
You are at:Home»News»Sarawak»‘Spirit of power sharing will still prevail’ 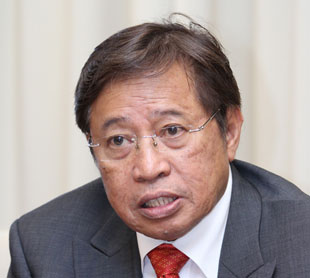 KOTA SAMARAHAN: PBB deputy president Datuk Amar Abang Johari Tun Openg has assured that the principle of power sharing among BN component parties in the state remains intact even if there is an increase in the number of elected representatives joining the party.

“Despite the fact of the increase in number, we are not greedy. We want to share power with our component parties,” he said after launching the state-level Teacher’s Day at Unimas here yesterday.

He said now that the PBB headquarters had received their applications to join the party, the membership of the trio, who were previously with United People’s Party (UPP), would be decided by the party’s supreme council.

“They have applied to us, but we will give them time. If they want to apply to any other component parties, they are free to do so. The thing is it’s up to them, it’s their choice. But since they have submitted their application, we will see during our supreme council meeting.”

PBB executive secretary Awang Bujang Awang Antek on Wednesday said the outcome of the trio’s application to join the party might be known when the party’s supreme council meets on June 5.

Meanwhile, Abang Johari refused to be dragged into talks of him becoming the next chief minister.

When he was asked about a statement by PBB senior vice president Datuk Amar Awang Tengah Ali Hasan that the latter hoped to see him become the next chief minister, Abang Johari responded: “It’s premature, what we do now is focus on our job and support the Chief Minister (Datuk Patinggi Tan Sri Adenan Satem).”