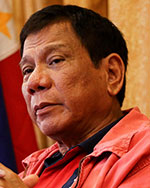 He was reported by several Philippine dailies announcing at a press conference in Davao City that Sabah is a Sulu Sultanate territory belonging to the Kiram Clan and his administration would reclaim it as part of the Philippines as the leaders of the sultanate are now citizens of that country.

“What has been the policy will always be the policy of the government, especially those for the interest of the country. We have to stake our claim,” he was quoted as saying in a Philippine Star report.

The Kiram Clan, which has laid claim on Sabah, are said to comprise descendants of the Sulu Sultanate, which according to the news portal, used to rule over parts of southern Philippines and Sabah.

Although the last Sultan of Sulu officially recognised by the Philippine government was Mahakuttah Kiram, who died in 1986, in 2013, his descendant Agbimuddin Kiram led some 200 armed men to invade Kampung Tanduo, Lahad Datu, Sabah in the name of Sultan Jamalul Kiram III to assert their rights over Sabah.

This resulted in a month-long bloody conflict between his followers and Malaysian security personnel.

The then President Benigno Aquino Jr was quick to clarify that the actions of Kiram’s followers were not sanctioned by the Philippine government.

On and off, the Philippines has claimed Sabah as part of its territory because Sabah was only leased and not ceded to the British North Borneo Company, which then handed Sabah over to the British government when the company decided to cease trading in the region.

The rationale asserted by the Philippines is that the heirs of the Sultan of Sulu continue to receive lease payments of RM5,300 annually for Sabah, the rate paid by the British North Borneo Company since 1903.

Malaysia, however, maintains that Sabah has been part of its territory since Sabah and Sarawak formed Malaysia together with Malaya and Singapore in 1963.

Apart from Sabah, the Philippines media also reported that Duterte is also claiming the Spratly Islands  located in the West Philippine Sea which has been claimed by China.

China has maintained that the disputed areas fall within the ‘nine-dotted line’ which it asserts as its territory.

However, the Philippines has challenged the claim in the International Tribunal for the Law of the Sea and said that China had violated the United Nations Convention on the Law of the Sea (Unclos) on exclusive economic zones and territorial seas.

Meanwhile, the Ministry of Foreign Affairs issued a statement yesterday saying that it is aware of remarks by certain quarters which appeared in the media on the claim on Sabah.

“The Government of Malaysia reiterates its position that Malaysia does not recognise and will not entertain any claims by any party on Sabah.

“Sabah is recognised by the United Nations (UN) and the international community as part of Malaysia since the formation of the Federation on Sept 16, 1963,” the statement said.

Previous ArticleDr Sim says he was told not to reveal the lunch session
Next Article Boat operators hiking fares not true, clarifies SRB