Saturday, October 8
You are at:Home»News»Sarawak»‘Sorry, timing for upgrade may cause inconvenience’ 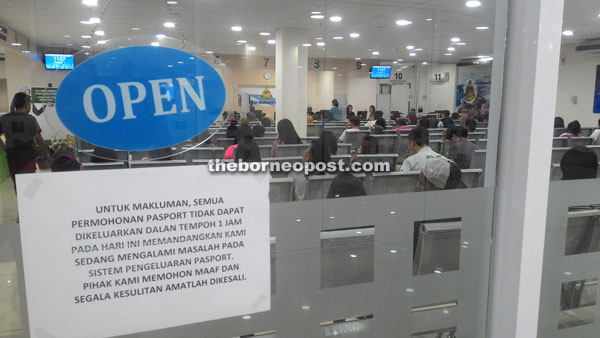 The notice of delay displayed at the immigration counter in UTC Kuching.

KUCHING: The state Immigration Department regrets that Putrajaya has chosen the festive season to upgrade its operating system.

The upgrade during this time could be a hindrance to holidaymakers as it is causing delay in issuance of Malaysian passports throughout the country since last week.

A source informed thesundaypost that it was a government effort to enhance the delivery system at all immigration counters as well as to improve the security of the chip-embedded Malaysian passport.

“It’s unfortunate that Putrajaya had to carry out the upgrading work during the Gawai period which is a peak holiday season in Sarawak,” pointed out the source.

He revealed that during peak seasons, approximately 400 applicants would be renewing or making new passports in Kuching, Sibu and Bintulu while about 200 applicants in Limbang and Lawas.

The highest number of applicants would be at the Miri office due to issuance of the Malaysia Restricted Passport to Brunei Darussalam.

“In Miri, daily average of 500 to 550 applications are received during peak periods such as the school holidays,” he said.

The state Immigration Department is doing its best to serve the people during this testing time.

He said after installing the system upgrade, technical staff from Putrajaya would be stationed at all passport offices nationwide to ensure that the new operating system would run smoothly.

“When there is a new system in place, there are bound to be hiccups here and there, which is why these assistants are specially flown in to iron out any problems that may crop up,” he said.

According to a news report on Sunday, the upgrading of the system throughout the country is expected to stretch until the middle of June, while the issuance of passports could take a week at least, instead of the usual one hour.

A quick visit to the Urban Transformation Centre (UTC) here yesterday revealed notices on the main doors and walls of the state Immigration Department counters informing the public of the imminent delays on issuance of their passports.

However, it did not deter at least 20 individuals seen waiting for their photos and particulars to be taken at the counter.