Saturday, October 1
You are at:Home»News»Sabah»Cop injured by car driven by drunk driver 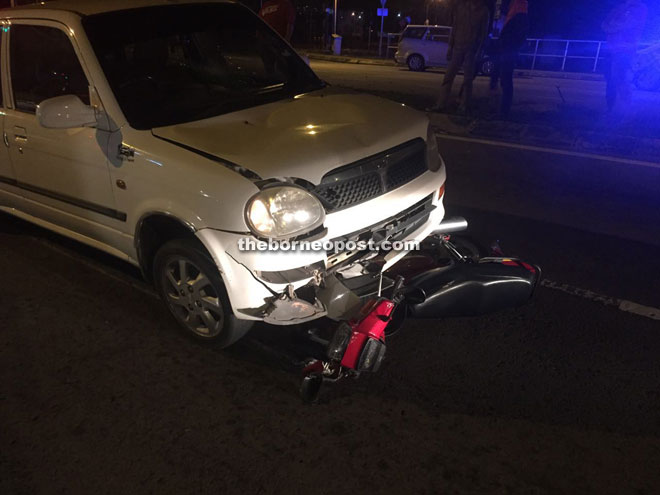 The car and bike involved in the accident.

KOTA KINABALU: A police personnel sustained serious injuries when he was hit by a car driven by a man who was under the influence of alcohol.

The victim, who is attached to the police air wing, broke his right thigh bone and also sustained head injuries.

He is currently warded at the Queen Elizabeth Hospital and his condition is stable, city police chief ACP M Chandra said when confirming the case.

Chandra disclosed that the 31-year-old victim from Pulau Pinang, was on his motorcycle when he was hit by the car driven by a 38-year-old man from Petagas.

Initial investigations into the incident, which occurred about 2am yesterday, revealed that the motorcyclist, who was travelling from Petagas, had stopped at the Pahlawan traffic light when it turned red.

Investigations also showed that the motorist who was coming from the opposite direction suddenly lost control of his vehicle and rammed into the police personnel.

“The motorist did not sustain any injuries but a blood test showed that he was driving under the influence of alcohol,” Chandra said.