Saturday, December 3
You are at:Home»News»Sarawak»Motorcyclist killed, fiery end for driver 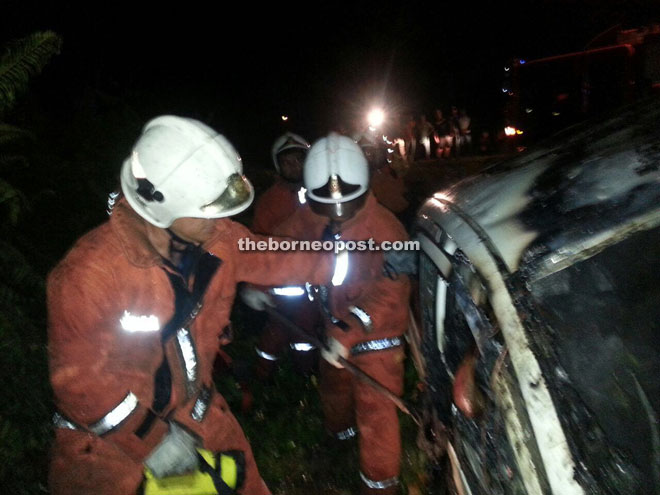 Bomba personnel at work after putting out the fire.

KUCHING: A collision between a sedan and a motorcycle at Jalan Sultan Tengah-Rampangi here claimed two lives yesterday.

The motorcyclist was identified as Mohamad Jumadi Rais, 31, but the motorist was so charred that the authority was unable to confirm the identity yet.

The identified victim was believed to have died on the spot after his motorcycle was hit from behind and crushed against a lamp post nearby.

The driver of the sedan was believed to have lost control of his car which caught fire as a result of the crash.

He said initial investigation led the authority to believe that the collision happened due to the negligence of the motorist.

Based on the probe, he said the collision took place at a single and straight carriageway.

He added that the weather was fine when the accident occurred.

The case is being investigated under Section 41(1) of the Road Transport Act, 1987.

Meanwhile, a report by the Fire and Rescue Department (Bomba) said the sedan was 80 per cent destroyed by the fire.