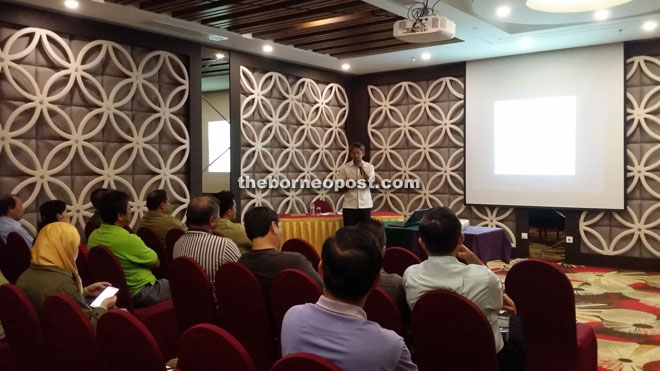 Cheu stresses a point during his briefing.

The briefings, conducted in Bintulu, Sibu and here, were specifically targeted at timber licensees and contractors with medium and big-sized barges registered under Sarawak Forestry Corporation (SFC) to raise awareness of the precautionary measure to take for barges with unlowered crane boom to avoid hitting and damaging transmission lines while cruising along rivers. Damaging the lines would result in major power outage or even cause fatality.

The briefing (supported by SFC) was initiated following a power outage that affected central and southern parts of the state in January. It is suspected that a barge passing underneath the Kemena-Selangau 275kV transmission lines had not lowered its crane boom, which then hit the overhead lines and caused the blackout. 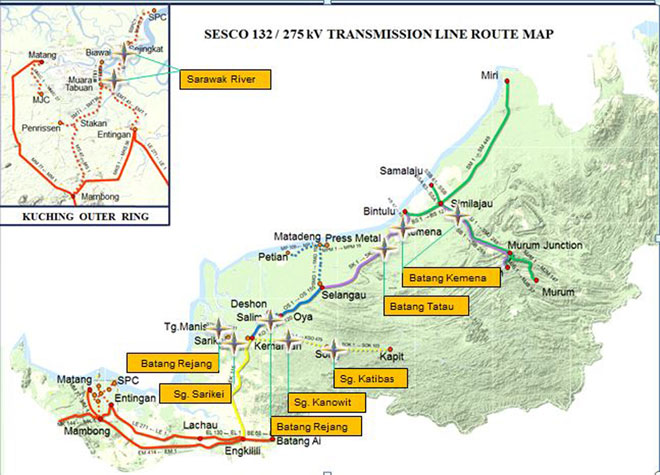 SEB transmission line operations senior manager Robert Cheu, who conducted the briefings attended by representatives from timber licensees, timber camps and logistics managers, contractors and SFC representatives from SFC, raised some salient points on safety measures that must be observed for those working near the vicinity of electrical facility. They were taught about safe navigation under power lines and what to do in the event of contact with power lines.

Participants listening to the briefings also gave useful feedback and suggestions, among which was that SEB could improve safety by making their warning signage more visible.

He said the RM2.7 billion major state infrastructure project would be aimed at reinforcing the existing 275kV state power grid and more importantly, minimising the risk of major power outages. The backbone transmission lines would run all the way from Similajau in the Northern Region to Tondong near here.