Wednesday, October 27
You are at:Home»News»Sarawak»Nazri: Government firm on preserving cultures 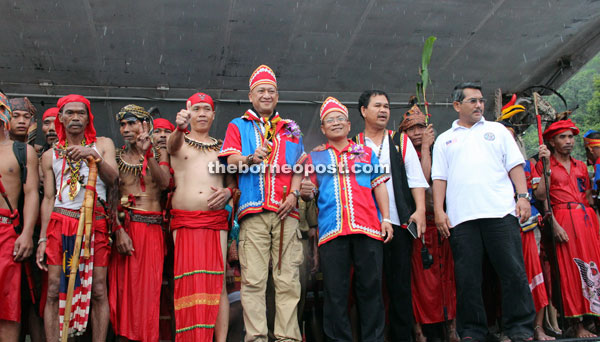 (Fourth from left) Nazri, Atok and state Ministry of Tourism, Arts and Culture permanent secretary Datu Ik Pahon Joyik in a photo-call with the guest participants from West Kalimantan.

BAU: The cultures and traditions of the diverse races in Malaysia are the soul of the country, and if they are not preserved, it will kill the very identity that makes this multi-racial country unique.

Hence, the federal government is firm on its commitment to preserve the heritage and cultures of all races in the country, said Datuk Seri Mohamed Nazri

Abdul Aziz, the Minister of Tourism and Culture, yesterday.

Officiating at the Nyebang Baruk Festival in Kampung Gumbang, some 25km from here, he assured Putrajaya would provide aid to maintain traditional structures and buildings in villages as well as organise cultural activities and rituals to preserve local customs.

He told those present that although Malaysia was a Malay-majority country, the government could not simply focus on preserving and promoting only one particular race as this would kill the identity of this multi-racial nation.

“Cultures, customs and traditions of the multi-ethnic societies in this country must be preserved at all cost. We can’t be focusing on one race or ethnic. Malaysia, being multiracial, has a multi-custom society. We will not only promote the Malay culture despite Malays being the majority race in this country.”

He stressed Malaysia would be made poorer if it lost any tradition and custom practised by any particular ethnic group.

“We must be proud to be a multi-racial, multi-custom and multi-lingual society.”

Touching on the annual festival, Nazri complimented the Bigumbang community for preserving their proud custom. Kampung Gumbang is one of the few villages that still celebrate this tradition.

Nazri admitted that he and many others in the peninsula were not aware that the Bidayuh, for instance, had so many sub-ethnic groups. During his recent working trip to the state, he visited Bidayuh areas such as Jagoi, Annah Rais and Belimbit, and he said it was an eye-opening experience.

At the gathering, Nazri said his ministry would help the village to build a new `baruk’ for tourism and cultural purposes. He hoped the new building would be completed by next year’s Nyebang Baruk Festival. 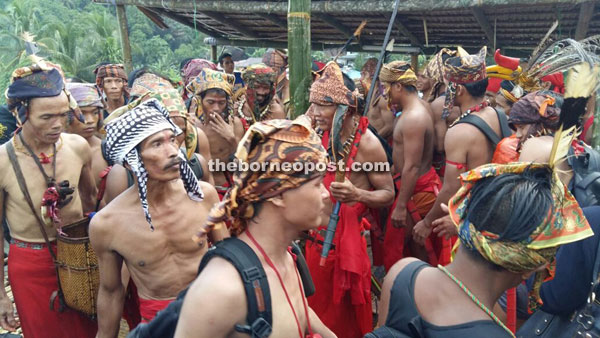 Some of the guest participants from West Kalimantan dances around a bamboo pole in the middle of the baruk’s tanju area after the Nyebang Baruk ritual.

The present baruk will be transformed into a heritage site to exhibit traditional items.

He urged the villages to continue promoting the festival to attract local and foreign tourists. His ministry also planned to build two traditional Bidayuh longhouses at Gumbang and Belimbit.

“I hope the Bigumbang community will use their new ‘baruk’ as a living heritage site. With traditional longhouses, tourist will not have to go to the cultural village to see one. They can go to a real Bidayuh village to experience the culture and customs.”

Meanwhile, village chief Atok Derop, in his speech, said the Bigumbang community here would continue to preserve old customs and traditions despite the onslaught of modern lifestyles.

The annual festival, held at the `baruk’ that was built over 100 years ago, formed part of a plan to turn the village into a tourist spot.

This year’s Nyebang Baruk Festival is held from June 2 to 4.