Wednesday, July 8
You are at:Home»News»Sarawak»All 82 assemblypersons sworn in 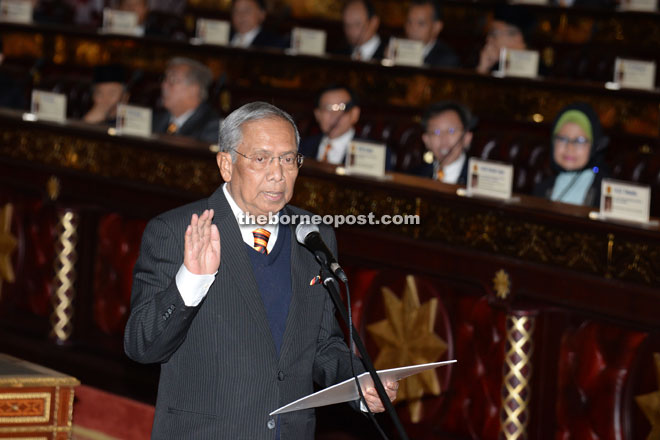 The swearing-in which started at 9.15am was led by Chief Minister Datuk Patinggi Tan Sri Adenan Satem who is the assemblyman for Tanjung Datu.

Besides the other elected representatives, the ceremony also witnessed the swearing-in of 29 new faces including new assemblymen representing the 11 new state seats following a re-delineation exercise which saw the number of seats increased from 71 to 82.

Mohammad Asfia, in his speech after the swearing-in ceremony, congratulated the 82 assemblypersons for their victory.

He also congratulated Sarawak Barisan Nasional (BN) under the leadership of Adenan for its landslide victory in the 11th state election which was held on May 7.

“The victory not only recorded two-third majority but also a landslide victory at 87.8 per cent of the total seats. BN won 72 seats out of the 82 seats contested. This is an excellent achievement and brilliant victory, congratulations to BN,” he said.

The first meeting of the first term of the 18th State Legislative Assembly began yesterday. It will be officiated at by Yang Di-Pertua Negeri Tun Pehin Sri Abdul Taib Mahmud today.

The august House will sit until June 15.