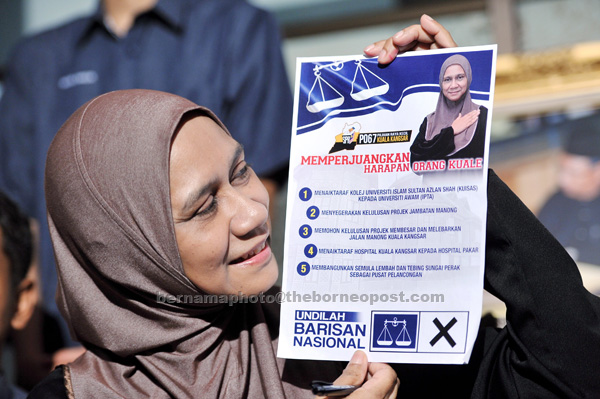 KUALA KANGSAR: Barisan Nasional (BN) candidate for the Kuala Kangsar by-election, Datin Mastura Mohd Yazid said she would not take any action against those who have slandered her but in fact, has forgiven them.

They include Parti Amanah Negara (Amanah) Perak deputy chairman Datuk Seri Mohammad Nizar Jamaluddin who had allegedly likened the death of Mastura’s husband, the incumbent MP for Kuala Kangsar, in a helicopter crash in Sarawak on May 5 as punishment from God for Barisan Nasional.

“I forgive Nizar because I believe Allah will show the truth to us all.

“I will not be taking action and I regard this matter as something I should forgive over. We move on,” she said at a press conference held at her residence, here, yesterday.

Mastura said Mohammad Nizar’s remarks about the death of her husband, Datuk Wan Mohammad Khair-il Anuar Wan Ahmad, deeply hurt her feelings and her family’s, but she forgave the former Perak menteri besar.

Mohammad Nizar at an Amanah public ceramah in Kampung Sayong Lembah, here, on Tuesday had also reportedly said that “Allah wants the people of Kuala Kangsar to ‘teach’ BN through the Kuala Kangsar by-election”.

Mastura, meanwhile, hoped that all parties contesting in the by-election would respect the moderation and harmony of the community in the Kuala Kangsar   parliamentary constituency.

Asked on the opposition’s tendency to play up national issues in the by-election campaign, she said: “We campaign differently. I have been chosen to represent Kuala Kangsar. Let me think of the national issues when in Parliament.”

Asked on some Umno members in Kuala Kangsar being unhappy over her selection as a candidate in the by-election, Mastura believed they would be with her.

“Surely among friends we will have our differences. Therefore, in any decision there will be some differences of opinion.

“But I’m certain and confident my brothers and sisters (Umno members) will be behind me,” she said.

The by-election on June 18 will see a four-cornered fight involving BN, PAS, Amanah candidates and an independent. — Bernama