Friday, May 7
You are at:Home»News»Nation»Motown, MH17 and more as Najib attends Wild Digital Conference 2016 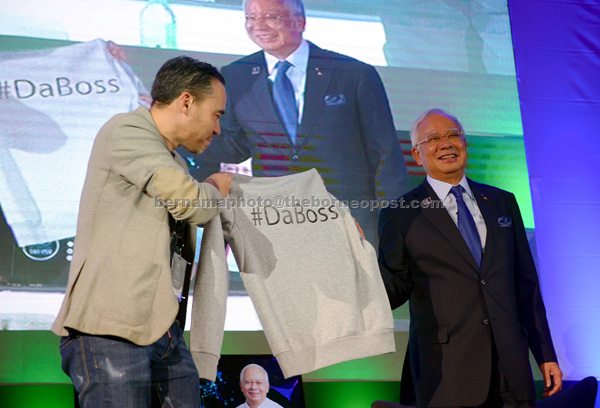 Najib (right) receiving a jacket with ‘#DaBoss’ emblazoned on the back from Patrick at Wild Digital Conference 2016 in Kuala Lumpur. — Bernama photo

KUALA LUMPUR: Prime Minister Datuk Seri Najib Tun Razak yesterday revealed his lighter side as he spoke about, among others, his musical preferences before delving into more serious matters like the downing of MH17 and those related to digital technology.

This happened as he made a surprise appearance at one of the sessions at the Wild Digital Conference 2016 here.

At the start of the session, co-founder and group chief executive officer of Catcha Group, Patrick Grove, who was the moderator, handed Najib a grey hoodie jacket.

Najib gamely got into the groove by taking off his dark blazer and put on the jacket with ‘#DaBoss’ emblazoned on the back for the interactive session.

Tackling a question on online music, the prime minister told the crowd that he was a big fan of fast Motown numbers and was partial to offerings from Lionel Richie and Bruno Mars as well.

To another question, Najib said he handled his Twitter account himself besides having a team who would tweet for him while he was on the go.

During the light-hearted session, several photographs that Najib had posted online, including his selfie with US President Barack Obama in the latter’s official car dubbed the Beast, were also projected onto a large screen.

Najib reckoned that the massive vehicle could comfortably handle a four-man conference with a high degree of security.

“I wish I could have one Beast in Malaysia,” he quipped, to laughter from the crowd.

The prime minister said he also hoped that young Malaysians dabbling in e-commerce would be steadfast in their effort to achieve success as he shared an inspiring story gleaned from his campaigning during the Sarawak state election.

“I visited a shop selling ‘kek lapis’ (layered cake). On the wall, the owner had put up a picture of her vacationing in California.

“She was able to do that by just selling kek lapis and doing e-commerce,” said Najib as he extolled the virtues of hard work and perseverance.

On how politics had evolved since he first came on board some 40 years ago, Najib said the situation now was a lot different than before.

“We have educated more people. We opened more universities. We use the social media, we have opened up society. Today, especially in the urban areas, people are more demanding and have a high level of expectations,” he said.

Turning to the MH17 crash in July 2014 that killed 298 people aboard, Najib noted that it was through networking that he managed to get hold of the separatist leader who was in control of the crash site in eastern Ukraine.

“I really felt for them (families and friends of the victims) … my own step-grandmother (Puan Sri Siti Amirah Prawira Kasuma) was also on board. I asked myself what I can do to find closure to the tragedy. That’s why I decided to activate my international networking,” he said.

After the greenlight was obtained to enter the crash zone, Najib said, he had to make a tough decision on sending Malaysian teams including soldiers there.