Sunday, October 17
You are at:Home»News»Sarawak»More cultural activities drawn up for Bario Nukenen Festival 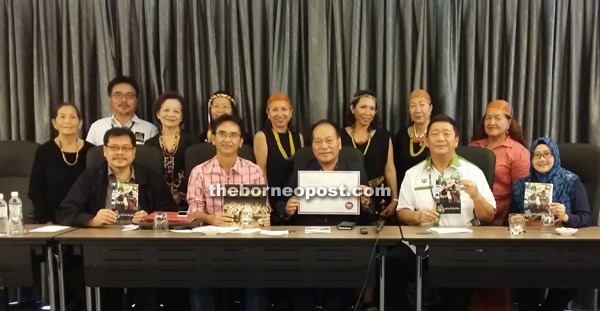 Isaac (seated at centre) showing the certificate received for the book on Pesta Nukenen Bario. From left are Abdul Aziz, Dr Philip, Lai and Laila (standing at centre).

MIRI: ‘Pesta Nukenen Bario’ (Bario Nukenen Festival) to be held on July 28 to 30 will have extra traditional and cultural activities to ensure guests and tourists have an enjoyable experience and come for a repeat event.

There will also be more traditional food of the Kelabit community to cater to the large number of guests and tourists expected.

“In Kelabit culture, food is associated with hospitality and an expression of friendship, demonstrated by the serving of food at any arrival of neighbours or visitors.

“This culinary heritage is at the very heart of the Kelabits, the Highland community, its socio-economic fabric, culture and tradition,” Rurum Kelabit Sarawak president Dato Isaac Lugun told a press conference at Pullman Hotel here yesterday.

The festival, the 11th of its kind, is organised by Rurum Kelabit Sarawak and will be held in Bario, a village located in the centre of the Kelabit Highlands in the northeast of Sarawak.

According to Isaac, the three-day celebration would showcase the cultural and culinary heritage of the Kelabit Highlands in northern Sarawak.

Pesta Nukenen Bario or ‘Festival of Food’ was initiated to preserve the traditional processing methods of indigenous edible plants, and safeguard local plant and animal species.

“It also serves as a platform to draw the close-knit community closer because over the past decade, the festival has evolved into an annual event to celebrate the legacy of the traditions of the Kelabit community, and a unique and distinctive way of life,” Isaac explained.

Such a unique community-hosted event was a pioneering endeavour with no parallel or precedent in the country.

Isaac also said they had a book published to commemorate the festival’s 10th anniversary last year, and it received the `Gourmand World Cookbook Awards 2015’.

Meanwhile, organising chairperson Laila Raja assured that as Bario now had electricity, they could stock up more food in refrigerators to cater to the crowd of guests and tourists.

“We expect over 1,000 people to come and are prepared with more food and interesting activities so food would not run out.”

Accommodation is available in the form of 20 registered homestays.

The guests will be locals and those from overseas with flights to Bario fully booked.

Miri Mayor Lawrence Lai said at the conference that Pesta Nukenen would be held in conjunction with Bario elevated to sub-district of Miri by the state government, as declared by Chief Minister Datuk Patinggi Adenan Satem last August.

“Bario being part of the resort city of Miri, the festival coincides with the 11th anniversary of Miri attaining city status in 2005. Miri is the gateway to Bario so this is a way to promote Bario as an eco-tourism district,” he said.