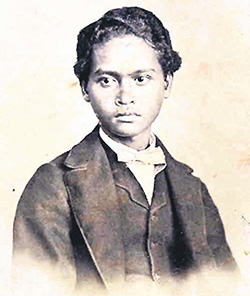 The only surviving photo of Ali, which was shot before he and Wallace parted ways in 1862. The image was published in the book ‘My Life: A Record of Events and Opinions’ penned by Wallace.

According to Borneo Oracle writer and local history fan Haslina Bujang, it is reported that Wallace first met Ali back in 1855, when he (Wallace) was spending his time studying the biodiversity of Santubong, after which the British naturalist immediately engaged Ali to assist him in his work.

“Ali should have a place in the soon-to-be-established Wallace Centre as he played an instrumental role in Wallace’s research on the Malay Archipelago — at least till Wallace returned to England in 1862,” said Haslina, adding that a study should be done as there were not much known about the mysterious Ali.

The next best thing as far as a good reference goes would be a piece published on the Journal of the Malaysian Branch of Royal Asiatic Society (JMBRAS) entitled ‘I am Ali Wallace’, written by John Van Whye and Gerrell M Drawhorn.

“It is also said that Ali made a major contribution to Wallace’s scientific understandings of the Malay Archipelago, through the addition of his own knowledge during the voyage,” she told thesundaypost here.

Haslina was responding to a plan by state government to build a Wallace Centre to complement the Darwin Centre in London, where visitors could learn about the rich biodiversity in Sarawak.

The centre is dedicated to Wallace — a British naturalist, explorer, geographer, anthropologist and biologist who was noted for his fieldwork in Sarawak in the 1850s, and also for jointly publishing The Theory of Evolution by natural selection with renowned naturalist Charles Darwin.

According to Deputy Chief Minister Datuk Amar Abang Johari Tun Openg, the setup of Wallace Centre is vital as he had been in the state to conduct his studies throughout most of his life, and the findings must be exhibited as an attraction.

Those from Sarawak Museum Department would work closely on the project with their counterparts from the British Museum on details of the project, said Abang Johari who is also Tourism, Arts and Culture Minister recently.

Sanib also said that specimens collected by Wallace needed to be brought back home.

For the record, a large section of Wallace’s collections are being kept in the Natural History Museum in London.

Not much is known about Ali, but Wallace did describe him as the ‘head of assistants — one who’s good in getting specimens, good in handling boats and directions’.

It is believed that Ali was the individual responsible to have collected the ‘King Bird of Paradise (Cicinnurus regius) — the very one that inspired the most moving passage in Wallace’s ‘Malay Archipelago’.

He was also the individual who successfully retrieved the Ivory Breasted Pitta, which Wallace had regarded as the ‘most beautiful bird of the East’.

Ali journeyed with Wallace through the sea voyage that had them collecting specimens in other places such as the Sulawesi Islands, Aru Island, as well as Ternate, Maluku and Papua New Guinea.

It was in Ternate where Ali met the love of his life — a local who later became his wife.