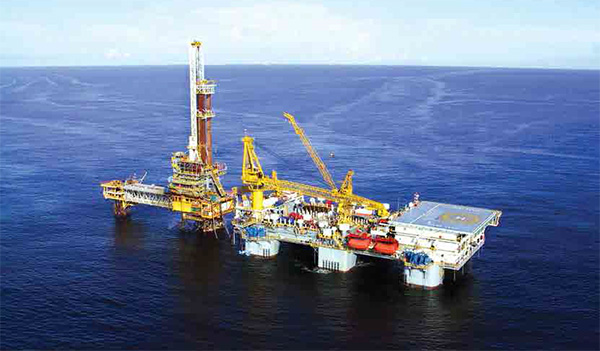 Following the recent gas discovery in its SK408 gas field which gives circa another three trillion cubic feet (tcf) gas reserve to the group, SapuraKencana has updated that commerciality of the field is better than the company’s existing B14 field which is not viable to be developed under the current oil environment.

According to the research arm of Hong Leong Investment Bank Bhd (HLIB Research), following the recent gas discovery in its SK408 gas field which gives circa another three trillion cubic feet (tcf) gas reserve to the group, SapuraKencana has updated that commerciality of the field is better than the company’s existing B14 field which is not viable to be developed under the current oil environment.

The research arm gathered that first gas on the newly-discovered reserve can be achieved earliest in 2019 as the group goes through several stages to monetise the gas field.

“The current B15 gas field is close to finalising its field development with funding already secured before this,” HLIB Research said.

“The group is going to operate the field by end 2017 and it is still economically viable even under the current oil environment.”

The research arm added that capital expenditure (capex) spent was lower than expected at US$90 million for SapuraKencana’s share from US$102 million budgeted previously due to savings gained from contractors.

HLIB Research noted that for SapuraKencana’s Petrobras contract, the group confirmed that its client has approached for a rate cut on its extension of the pipelaying contracts and a discount of circa six per cent was given by SapuraKencana to maintain its relationship with client.

“However, termination of vessel as rumoured in Upstream previously is denied by the management and risks of near term termination is low as oil prices are recovering,” the research arm said.

As for SapuraKencana’s tender rig business, HLIB Research noted that outlook has turned weaker with tender barges fetching US$70-90,000 per day while semi-subs fetched US$110-120,000 per day.

“Five rigs were stacked in 2015 with two expected to go back into contract this year,” it said.

However, another five rigs would be out of contract this year, therefore reinforcing HLIB Research’s view that the rig segment would be even weaker this year.

The research arm believed the worst scenario would be eight rigs being idle at a point of time this year and this would impact SapuraKencana’s profitability adversely.

Overall, HLIB Research noted management had guided that the group’s current orderbook would only result in revenue of RM6.5 billion and RM3.9 billion for finanical year 2017 (FY17) and FY18, indicating weak profitability reinforced by margin pressures on existing backlog.

“Current bid book of the group stood at US$7 billion with half of it targeting the Asia Pacific region,” the research arm said.

“While prospects of further securing jobs are intact, profitability of new contracts remains under pressure due to intense competition among contractors.”

HLIB Research’s FY17/18 forecast was cut by 80 per cent/67 per cent to account for higher idling and lower daily charter rate (DCR) for tender rigs and lower replenishment for SapuraKencana’s fabrication and transportation and installation (T&I) business segments.

However, HLIB Reserach maintained its ‘hold’ call on SapuraKencana with a lower target price of RM1.58 per share.

The research arm’s valuation methodology is now switched to price to book value (PBV) from price earnings ratio (PER) due to unpredictability of SapuraKencana’s earnings in the medium term.

HLIB Research’s assumption of 0.7-foldp PBV multiple is pegged to FY18 BVPS, which is higher than its target of 0.5-fold for rig and offshore supply vesselplayers as the research arm factored in SapuraKencana’s potential upside for the group’s upstream assets and edge as an integrated services player.