Thursday, August 6
You are at:Home»News»Sarawak»Why still no amendment to definition of rape — PKR Women 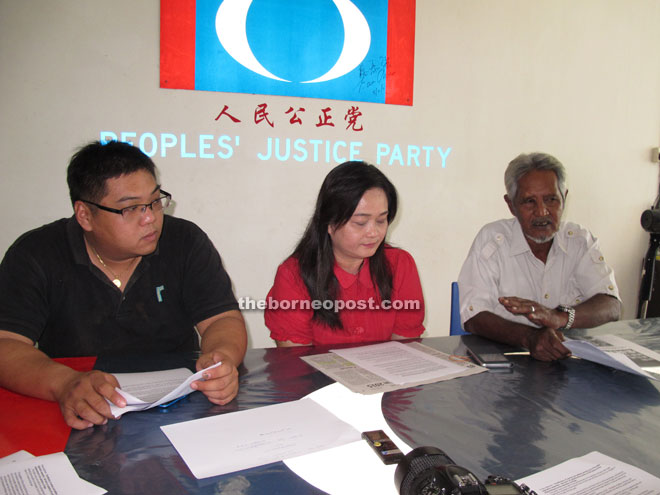 KUCHING: The Ministry of Welfare, Women and Community Wellbeing’s winding-up speech falls short of updating the public on the status of the admendment to the definition of rape.

National PKR women vice chief Voon Shiak Ni said the public outcry and call for the admendment of the definition of ‘Rape’ was made following the acquittal by the Court of Appeal of a 60-year-old man in Sibu from four charges of rape of a 14-year-old girl last year.

Voon told a press conference yesterday that the appellant, Bunya Jalong, told the court there was no penile penetration,

and that the minor became pregnant because he inserted his semen-smeared fingers into her and the court acquitted Jalong based on the present legal definition of sexual intercourse, which included only penile penetration.

“This bizzare case has come to the attention of the Minister of Welfare, Women and Family Development Datuk Fatimah Abdullah and also Minister in the Prime Minister’s Department Nancy Sukri.

“Both state and federal ministers have supported the call for the admendment, saying the admendment must be done as soon as possible believing that the amendment could be passed and gazetted last year,” she said.

According to Voon, the Sarawak Women for Women Society (SWWS) also said there must be no slowdown in the amendment process, and called for a timeline to be published.

rape by the end of last year. There was also a nation-wide protest on the circumvention of the penal code.

“A year has passed but there is still no update on the status of the admendment. The issue was not even mentioned in the State Legislative Assembly .

“We hope our state ministry can put pressure on the federal ministry to get this important admendment done soon. Sexual crimes till today do not see any decrease and we do not want those rapists to be roam free on the streets again because of the inadequacy of our laws,” she said.

Most rape cases in Malaysia involved victims below 16 years old and the nature of rape was becoming more violent and brutal these days, she said, adding there were on average of about 3,000 rape cases reported every year or the equivalent of one woman being raped every 35 minutes.

“We wish to make a serious demand on our state ministry to pressure for an admendment and not to let the delay be another regret for another rape victim.

“We also wish to call for more people to speak out against rape to generate more awareness on it in society,” she said.