Saturday, January 29
You are at:Home»News»Sarawak»Donut boat rides to become next tourism attraction on Sarawak River 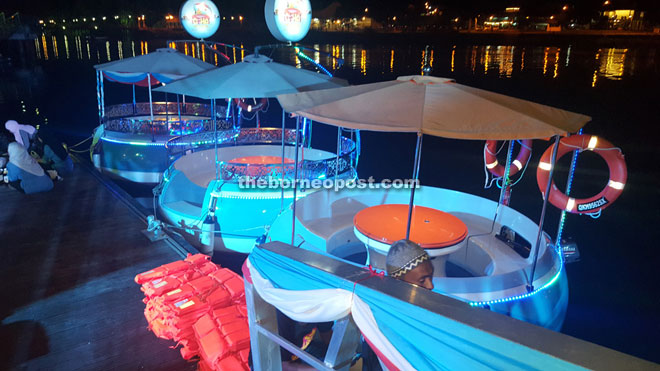 The donut boats being docked at a platform behind Grand Margherita Hotel at the end of Kuching Waterfront. 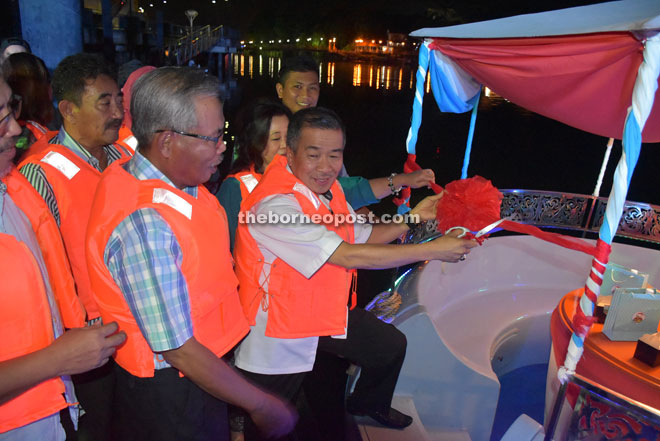 KUCHING: The city will soon have another tourism attraction centred on Sarawak River.

The ‘Ooha Donut Boat Ride’ is expected to become an alternative means for locals and tourists alike to enjoy the river, apart from the existing express boats, river cruise and ‘penambang’ (wooden roofed boats).

has a round table down the centre for passengers to enjoy snacks on.

On Thursday, state officials and members of the media got to experience the ride on these ‘river gazeboes’.

Assistant Minister for Entrepreneurs Development Datuk Mohd Naroden Majais, who officiated at the soft launch of the new service at a hotel here that night, said although the concept was a new one in Sarawak, services similar to it had

already been operating in other states.

“We actually saw this concept from China and we thought that it would be a lovely addition to Kuching’s activities of attractions. This service offers the scenic view of many places of attraction, such as the iconic and historical buildings along Sarawak River — or more specifically, along Kuching Waterfront,” he added.

Additionally, Naroden commended the operator for working closely with the state government on the proposed management of the donut boat service.

“They managed to come up with the concept that had the potential of attracting more tourists to Sarawak.

“Having said this, I urge Sarawakian entrepreneurs to take advantage of the state’s ever growing tourism industry. Sarawak has a lot to offer tourists and as such, we need the participation of local entrepreneurs to help the industry develop even further,” he said, citing the state capital as an example.

“Kuching could be a more interesting place to visit if there were more exciting activities held.

“That is why we need local entrepreneurs to play their role in diversifying the activities for tourists. As they promote their businesses, they would also promote Sarawak as an interesting tourism destination,” added Naroden, who is also Gedong assemblyman.