Sunday, May 22
You are at:Home»News»Sarawak»Fatimah continues homeless ops in Bintulu 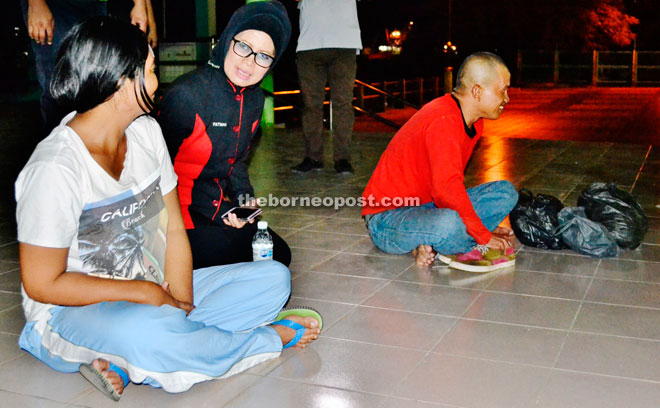 Fatimah talks to a vagrant at the Bintulu Esplanade.

BINTULU: Two vagrants, an 11-year-old boy and his mother were tested positive for drug by personnel from the National

According to Fatimah, a similar operation was conducted in Kuching last week where they rounded up vagrant children aged 18 years and below.

“Here, we not only found homeless people but other problems associated with drug abuse as well,” she said when met by reporters.

Officers from the Welfare Department (JKM) she said would take appropriate action on the case.

Fatimah said the vagrants issue should not be left unattended because other negative elements like drug abuse would crop up.

“If they are addicted to drug but (have) no money what will happen is, this problem can lead to other problems and that is why it must be tackled accordingly,” said Fatimah.

Meanwhile, she said different approaches would be taken against mentally-ill vagrants and medical examination would be made to determine whether they should be sent to the asylum in Mile 7 Kuching or otherwise.

“As for those aged between 18 and 59, we will put them at Desa Bina Diri in Samarahan,” she added.

Fatimah said the objective of the operation was to provide assistance and rehabilitation especially to the children so that they could build a better new life.

The operation was conducted at the old town centre up to the Bintulu Esplanade, Parkcity Commercial Square, Medan Jaya and Bintulu Bus Terminal.