Sunday, February 5
You are at:Home»News»Sarawak»Mystery surrounds RM12 mln handover
For the freshest news, join The Borneo Post's Telegram Channel and The Borneo Post on Newswav. 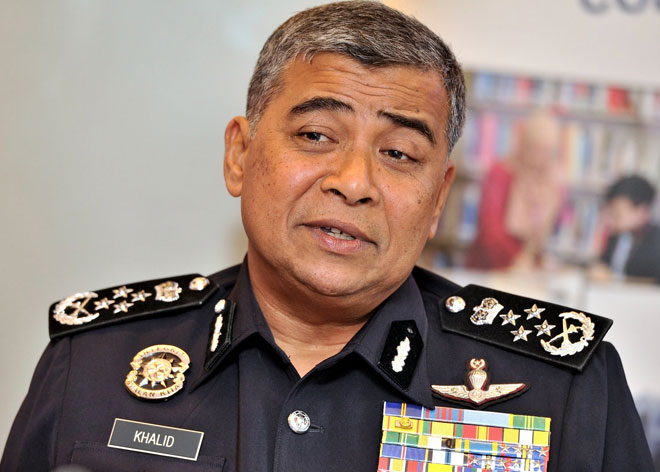 KUCHING: Police have never received the RM12 million, which had been raised for the release of the four Sarawakians who were kidnapped by Abu Sayyaf militants in southern Philippines recently.

Inspector-General of Police (IGP) Tan Sri Khalid Abu Bakar has denied claim of the force receiving the ransom money, which he said was instead handed over directly to an unknown ‘third party’ to help in negotiating for the release of the hostages.

His statement, as quoted by Malay Mail Online, contradicted that made by Home Minister Datuk Seri Dr Ahmad Zahid Hamidi on Thursday, who said the RM12 million was handed to police before it was given to a welfare organisation in the Philippines.

The deputy prime minister was also quoted by Bernama as saying that the welfare organisation was a legal entity operating in the Philippines.

“I am denying that the Special Branch had received the money,” Khalid told reporters in Putrajaya yesterday.

“I don’t know. I do not want to know,” the IGP added, when asked if police were aware who the recipients of the money were.

Zahid was also quoted as having said that the RM12 million had been ‘given to the PDRM Special Branch’ — using the initials for the Royal Malaysia Police, which then purportedly channelled the money to certain bodies in the Philippines.

On the other hand, Khalid yesterday said the police only accompanied the family to Zamboanga City (Philippines) to meet the so-called ‘third party’.

He stressed that the family made the request after they were approached by various welfare and Islamic non-governmental organisations (NGOs), which offered them help to secure the release of the four.

“That is what the DPM meant when he said the money was given to some welfare groups because these were the third party that made the offer to help secure their release,” Khalid said.

When asked by Malay Mail Online to state if this meant the money was indeed for ransom — only that it was given through a third party — Khalid was tight-lipped.

“I don’t know. That is what they say,” he answered, as he also did elaborate on the government’s official position on the matter.

“They (family members) wanted to meet the people they contacted there, so we…well you know, they’re in a desperate situation, so it was only natural that we gave assistance,” said Khalid.

He also maintained that police officers had been strictly told against interfering with the negotiations.

“So, all assumptions and allegations that we did pay the ransom are not true — I do not know about the money, where it is channelled to.

“(But) I think the family knows — where the money went to, who received the money.”

Brothers Wong Teck Kang, 31, and Teck Chii, 29; their cousin Johnny Lau Jung Hien,21; and an unrelated friend Wong Hung Sing, 34; were kidnapped from a commercial barge, MV Massive 6, off Pulau Ligitan on April 1 while returning to Tawau, Sabah, after sending a cargo of wood to Manila.

On June 8, the abductors freed the four who spent 69 days in captivity.

An uncle to one of the freed hostages revealed on Wednesday that RM12 million was raised to pay the ransom for the four men, and given to police on May 24.

Datuk Lau Cheng Kiong, who is Johnny’s uncle, said families of the four freed hostages raised the RM12 million through the mortgage of two houses, the affected shipping company, and contributions from members of the public to seek their release from the militants.

Of the amount, RM1 million were proceeds from the mortgage of their two houses in Pulau Li Hua, RM2 million from the shipping company where the four worked, and the rest was raised from the public.

Besides Malaysians, some of the contributors were also from China, Papua New Guinea, Taiwan and the Solomon Islands.

“All the money raised was handed to the relevant authority in Sabah handling the hostage situation,’ he told a press conference in Sibu.

Cheng Kiong said the money was handed over to the relevant party on May 24, between 4pm and 6pm.

He said two Special Branch officers collected the money from Hong Leong Bank in Sandakan and left the bank at about 6pm that day.

The money was put in 12 metal boxes — each containing RM1 million — and the boxes were later taken by a lorry to the police department.

“The money was then left in the custody of the police.”

He advised those who still wondered about the whereabouts of the money to call the Hong Leong Bank in Sandakan for clarifications.

“Hopefully, this would clear the air over the money raised to seek the release of the four once and for all,” said Cheng Kiong, adding that the affected families were very grateful to everyone who had responded to their cry for help.