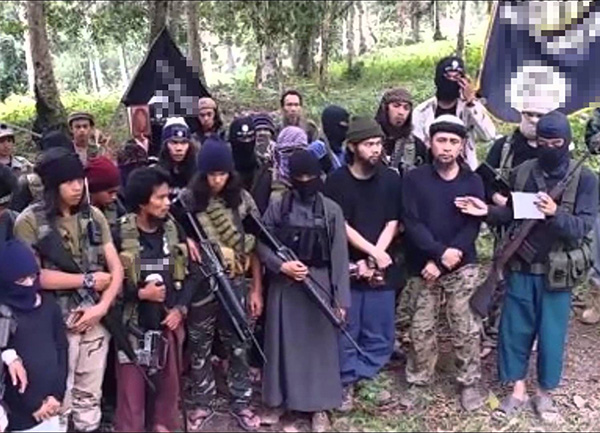 A screen grab shows a group of Abu Sayyaf militants.

WHEN news broke that the four Sarawakian sailors were released someone posted on Facebook, “Hallelujah, at last a happy ending.” I am not too sure about that. I think, perhaps ‘an unhappy beginning’ is more appropriate.

It was Zig Ziglar (1926 to 2012), an American author and motivator, who said, “man is capable of making a bad situation worse”. Kidnapping for ransom is a bad thing. However, the handling of the situation after the resolution of this very unpleasant matter has made things even worse. The authorities faced with incessant questioning, whether the ransom demanded by Abu Sayyaf was paid or not, came up with replies that were each more ridiculous than the last.

Firstly, I must say that I sympathise with the police. They were caught in a no-win situation. What could they say? That they acceded to the demand for ransom by those miscreants masquerading as freedom/religious fighters? How could they say, “Yes, we collected the money from the families and paid off the kidnappers. That’s why they released the hostages.” That would go against the generally accepted international protocol of no negotiation with kidnappers. So, they started off with the standard “no, we did not pay” line. However, the questions were incessant and for obvious reasons.

The families had to mortgage their homes to raise part of the money. The shipping company chipped in with a couple of million and the rest were donations from as far as China, Papua New Guinea, Taiwan and the Solomon Islands. So when the authorities said, “no, we did not pay the ransom”, the families naturally wanted to know what happened to the money that they raised, for which they would have to spend the rest of their lives to repay the banks. It became even more awkward when the families were able to describe in detail how the money was handed over (in 12 steel boxes) to special branch officers in Sandakan.

The Home Minister was caught in a quandary. However, being the ‘power-that-is’ he could very well have opted for “no comment, it is under police investigation” or just simply invoked the Official Secrets Act. But no, instead he chose the most ludicrous and damaging reply. He was reported to have said, “The RM12 million given to the PDRM Special Branch was collected from the public as well as the (the family’s) selling of assets, and I can confirm that the money was channelled not as ransom money, but to certain bodies in the Philippines.” He added that these Muslim recipient bodies are all legal agencies, some dealing with welfare and various other legal activities.

Doesn’t the man understand the implications of what he said? The Abu Sayyaf is a breakaway group from the Moro National Liberation Front (MNLF) that has been fighting the Philippine government for decades. At first they (Abu Sayyaf) portrayed themselves as fighters for the liberation of the Southern Philippines – Mindanao.

Over the years they have degenerated into a band of ruthless pirates specialising in kidnapping and extortion for money. To give themselves an air of legitimacy and to win sympathy and support from the Muslim world, they have added a religious flag to their banner.

The world (except for a few misguided naive few) recognises them as they are – a ruthless profit driven band of brigands. Now this band of criminals has been elevated to the status of modern day Robin Hoods. I am sure the sympathisers and supporters of the Filipino charities, the beneficiaries of the generous donation, will hail the Abu Sayyaf as heroes. Hey, anyone who can help to bring in millions to their coffers is certainly a hero.

The Philippine government has been trying to subdue the Abu Sayyaf for over a century and to no avail. Recently, Philippine President Benigno Aquino said he considered declaring martial law in the Sulu province to contain the bandit group. However, he declined because as he said, “… there is no guarantee that there will be positive results. There might even be negative results. The enemies might gain more sympathy.”

It is a fact that these criminals are hiding within the community — like fish swimming in a river of supporters. Maybe for now this ring of supporters is limited to just close relatives and sympathisers, but with our Home Minister saying that the money raised has been donated to some Muslim welfare agencies, there is great likelihood that this river might grow into an ocean. The Abu Sayyaf has transformed from a gang of robbers into a super fundraiser for a good cause.

As I said in the beginning, this is not a happy ending but an unhappy beginning. The Abu Sayyaf will continue to consider Sabah and its surrounding waters as a big ATM machine. Only now they will visit it with greater impunity believing that they are sharing their good fortune with the less fortunate of their community.

We are now entering a new chapter of a dark tunnel, made darker by our authorities’ handling of it. The worry is that it seems for now the only possible light at the end is in the form of a President elect (Rodrigo Duterte) who believes that he is Dirty Harry. (‘Dirty Harry’ is a 1971 American action thriller film featuring Clint Eastwood as Inspector Callahan, who believes in shooting a criminal first and asking question later).

Already at least one Philippine Senator is urging Duterte to give the Abu Sayyaf criminals a dose of their own medicine. “No better time to address the ASG problem than under Pres Duterte: kidnap them back or kill them,” tweeted Senator Panfilo Lascon, the former director-general of the Philippine National Police.

Perhaps some human rights lawyers might be sharpening their pencils to draft some protests. However, I believe those suffering under the scourge of the so-called ‘Bearer of the Sword’ will not shed a tear for the collateral damage that might result from this policy.