Tuesday, August 11
You are at:Home»News»Sarawak»Kuching to have a chess park 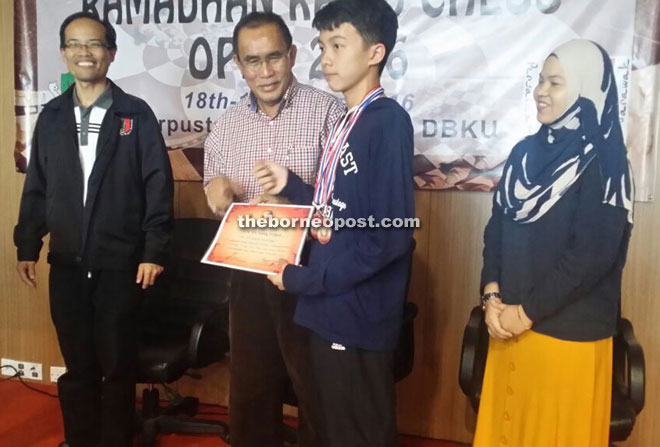 Len (second left) presents a certificate to a young player who recently did well in a national tournament. On his right is Reduan.

KUCHING: Chess enthusiasts may soon have a place in the city to converge for friendly games. A designated space for the game, similar to the concept in parks in certain European cities, is being planned for Kuching.

Assistant Minister for Workforce Development and Training Datu Len Talif Salleh, an avid chess player himself, said he has suggested this concept to Kuching City North Commission (DBKU) for implementation at Kuching Waterfront.

“In European countries, you can find a chess section in the parks in the city centre. Why not we do it at the Kuching Waterfront, starting with three to four tables where chess enthusiasts can converge and play the game? This is one way to attract more visitors.

“If we have something like that, more people will come for recreation. I have mentioned this a few times to the DBKU Mayor and God willing we shall have it one day. This can also be a good place for tourists to interact with locals,” he said when closing the Ramadan Rapid Open 2016 yesterday.

Len Talif, who admitted he was an avid chess player in his younger days, said chess is a good platform to develop analytical skills as the game requires strategic and tactical thinking.

He however conceded the game was not popular due to lack of exposure and promotion especially among the younger generation.

“This is probably because the game is not as attractive as football. Chess is not a physical sport, but it can train our mind to think strategically and tactically. And in this game, it doesn’t matter how big or small you are, at the chess table it is the sharpness of the mind that matters,” added Len Talif who is also Assistant Minister for Environment.

He also spoke about how chess can forge greater solidarity among the people, and he urged the Sarawak Chess Association and other related associations to cooperate with the Ministry of Youth, Sports and Solidarity on this matter.

“Build relationships with other associations to lift up the standard of the game, so that more will be attracted to play chess,” he said, assuring that he, as Sarawak Chess Association patron, would assist in terms of financial support for the association’s activities.

A total of 80 chess players took part in the Ramadan Rapid Open 2016, which has been registered as a National Rated Event. It was also the ninth tournament organised by Sarawak Chess Association so far this year.

The association’s president Abang Mohd Reduan Sahari said some young players from Sarawak finished admirably in several national tournaments this year. They include Teh Yi Lyn who finished third and Vivian Ngieng who finished fourth in the National Age Group held in Tronoh, Perak in March.

“Recently, six of our players represented Malaysia at the Asean Age Group in Pattaya, Thailand, and the team brought home eight bronze medals,” he informed.

He added the association was also given the honour to organise the national-level Paralympiad Chess Tournament from August 6 to 11 to take place in Unimas, Kota Samarahan.