Saturday, September 19
You are at:Home»News»Sarawak»New twist to ransom payout mystery 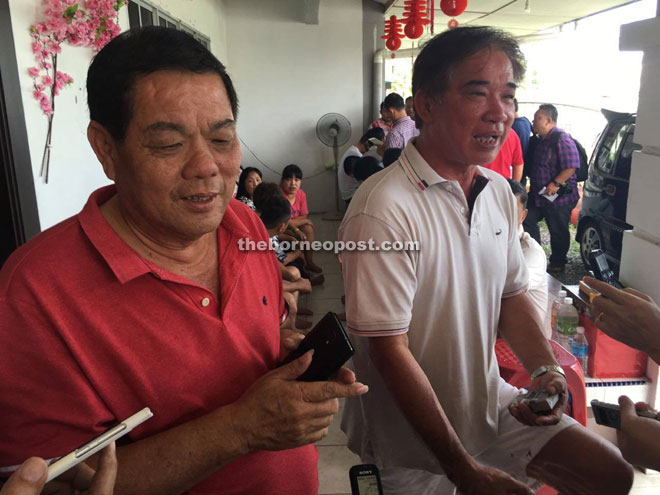 Cheng Kiong (left) speaking to reporters last Wednesday at the residence of freed hostage Johnny Lau. On his left is Wong Chee Ming, father of Teck Kang and Teck Chii.

SIBU: The ransom payout issue involving the release of the four hostages from Sibu by the Abu Sayyaf militants has gotten muddier.

It quoted an unnamed senior official source of the Philippines as saying “a local government official in Sulu was involved in the negotiations. It is common knowledge in Malaysia that usually P30 million is paid as ransom for any Malaysian victim in the past”.

According to The Manila Times source, there was credence to allegations by Jolo Mayor Hussin Amin that some local officials, probably including the military, might have colluded with the Abu Sayyaf, which recently beheaded Canadians Robert Hall and John Ridsdel (when no ransom was paid).

The news report further quoted the unnamed official as saying the Abu Sayyaf militants were “incensed after learning from news reports that the money was actually RM12 million, equivalent to P130 million, but that only P100 million reached them”.

The four freed hostages are brothers Wong Teck Kang and Teck Chii, Johnny Lau and Wong Hung Sing. They arrived in Sibu from Kota Kinabalu last Tuesday after release from 69 days in captivity.

They were kidnapped on April 1 at night when their tug boat was heading for Sabah from the Philippines.

When contacted here yesterday, the spokesman for the hostages’ families, Datuk Lau Cheng Kiong, stood by his earlier statement that RM12 million was remitted through Hong Leong Bank to the police in Sandakan.

“I still maintain what I have earlier said, which is that RM12 million was sent to Sandakan through the bank. If the public has any doubts, they can enquire the matter with Hong Leong Bank.”

Cheng Kiong, who is Johnny’s uncle, however, did not want to comment further on the matter as the affected families had nothing more to say.

He said they were compelled to reveal the truth on the ransom payment last Wednesday when the four returned to Sibu because the families were answerable to the donors.

Last Saturday, when The Borneo Post contacted Cheng Kiong for comments on the contradictory statements of the police and the Home Ministry, he also appealed for the matter to be laid to rest for the sake of the families and the four individuals.

He added that the four were still struggling with their emotional and psychological scars.

Inspector-General of Police (IGP) Tan Sri Khalid Abu Bakar had denied last Friday that the police had received the ransom money while Home Minister Datuk Seri Dr Ahmad Zahid Hamidi said the RM12 million were received by the police before it was given to an Islamic welfare organisation in the Philippines as donation.

The Manila Times report yesterday further stated: “It (ransom payment issue) is now a burning issue in Malaysia. The ransom payment is already one of their headlines, but surprisingly, it has yet to reach the Philippine media’s attention.

“The question is, where did the missing money go? Obviously, there is complicity here. Much of the answers could be provided by the governor of Sulu [Abdusakur Tan]”.

During the press conference here last Wednesday, Cheng Kiong said the sum was raised by the families, relatives and friends and was transmitted through Hong Leong Bank in Sibu for the Special Branch police in Sandakan to withdraw on May 24 between 4pm and 6pm.

He said two Special Branch officers, armed with an approval letter from Bank Negara, withdrew the money and carried them in 12 metal cases to the police station.