Wednesday, August 17
You are at:Home»News»Sarawak»Baru urges govt to resolve all NCR issues quickly 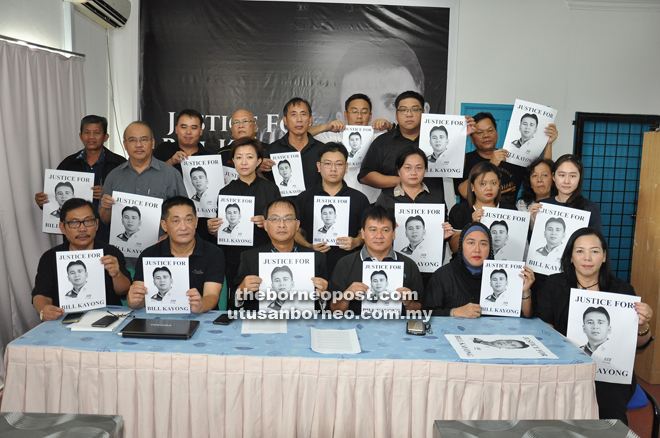 Baru (seated third from left), See (on Baru’s right) and other state PKR leaders holding posters calling for ‘Justice for Bill Kayong’. A Facebook page created soon after the murder had garnered 2,023 likes as at 8 pm yesterday.

He, thus, urged the government to immediately look for ways to resolve all NCR disputes quickly to prevent further violence and loss of lives.

The government, said Baru, must take a relook at its policies and practices of issuing timber licences and provisional leases as they had caused much unhappiness and hardship to the natives.

“The problems arising from these policies—corporate greed, corruption and contempt for native rights—are the reasons people like (the late) Bill Kayong and the rest of us carry on fighting for the landowners against the companies and the government,” he told a press conference, here yesterday.

Bill, who was PKR Miri branch secretary, was shot dead at a traffic light intersection in front of E-Mart commercial centre in Permyjaya, Miri, at about 8.30am Tuesday.

Baru recalled that Chief Judge of Sabah and Sarawak Tan Sri Richard Malanjum had once proposed the setting up of a Land Commission, and he (Baru) suggested Chief Minister Datuk Patinggi Tan Sri Adenan Satem act on this suggestion immediately.

He said the murder of Bill must not become yet another unsolved case, and that Sarawakians must not let his (Bill) struggles and ultimate sacrifice be in vain.

“We are extremely concerned at the level of violence that has crept into our society against politicians and social activists. To find the motive, the police must look at Bill’s activities as a member of PKR and Pedas (Persatuan Dayak Sarawak) that have been widely shared on social media and reported in the press,” he said.

“Bill’s death may be linked to these two facets of his life.”

Baru said Bill, who was also Miri MP Dr Michael Teo’s political secretary, was a well-known politician and stood as a PKR candidate in Bekenu during the recent state election.

“As the secretary of Pedas, Bill was active in defending native land rights and often stood up for longhouse residents against encroachment by timber and plantation companies.”

Baru said threats against politicians, lawyers and activists were real, especially for those who spoke up against land encroachment.

“Last year, he said, Dr Teo was assaulted and seriously injured in front of his office by an assailant, but the case was never solved. And a few years ago, a Molotov cocktail was thrown into the compound of Batu Lintang assemblyman See Chee How’s house.

“It was reported that Bill had received calls warning him not to get involved in land cases. Chee How, Abun Sui and I have also received such calls, too.”

In urging the police and the state government not to remain inactive over NCR land-related violence, Baru also related a case in Melikin where Surik Muntai, who was fighting for his land rights, was viciously attacked and crippled by gangsters in 2013.

“One of the assailants was identified as a worker for the politically-connected plantation company in the area, yet despite the police discovering a stash of weapons at the workers’ quarters, no one has been held accountable for this crime.”

In another case in Bekelit, Baru said Rumah Jambai had been fighting for his land since 2008, and during that time, his house and car were burnt, and he was beaten and slashed with a samurai sword last year.

“The plantation company that is involved is also connected to powerful people, and again, no one has been brought to justice.”

The latest incident that Bill Kayong was involved in was at Bekelit in April, where there was a confrontation between the villagers and the assistant manager of the plantation, who was accompanied by plainclothes police officers and immigration officers, said Baru.

He added there had been countless police reports lodged over these two cases but no actions were taken.

“Is it any wonder that the public has lost confidence in the local police? Whether it is true or not, the public perception is that they are compromised.

“For this reason, we welcome the announcement by the Inspector-General of Police Tan Sri Khalid Abu Bakar that a Special Taskforce has been formed to investigate Bill’s murder, and we request that no local police officers be involved as far as possible, to give the perception of independence.”

He also echoed the state police’s appeal for eye witnesses in Bill’s murder to immediately come forward to assist in police investigation.