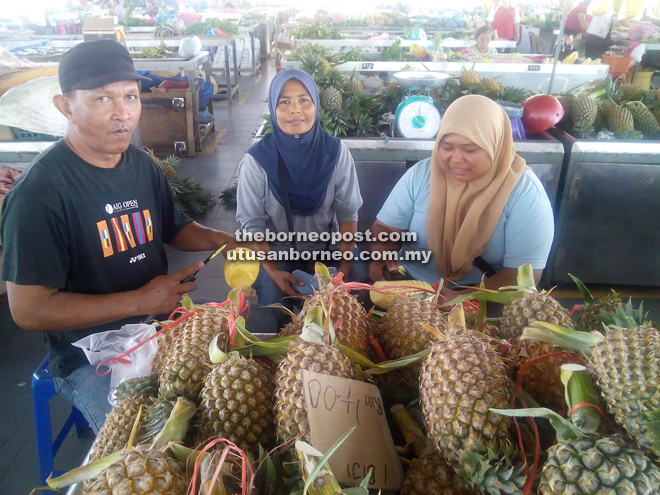 (From left) Ahmad, Azinah and her sister Hasinah Abu Bakar at their pineapple stall at Sarikei Wet Market. 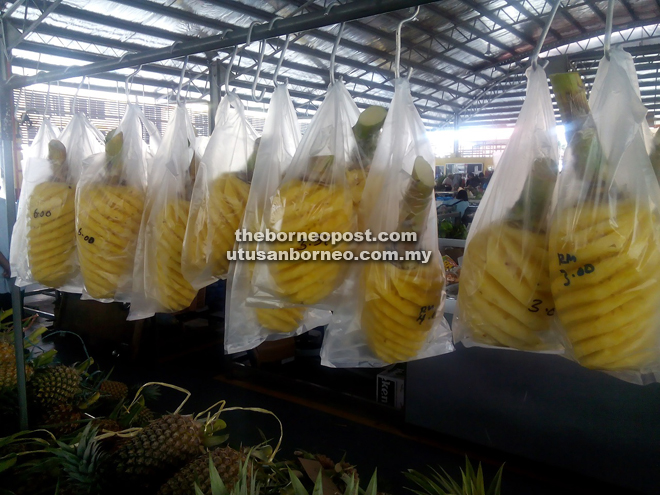 SARIKEI: A pineapple is a symbol of wealth, luck and fortune according to Chinese culture and beliefs.

In Sarikei town stands a sculpture of a pineapple for which the town is famous.

Sarikei pineapple which is the best in Sarawak thrives in the rich soil of this region.

This commercial fruit is a big income earner for the so-called Fruit Basket in the central region of Sarawak.

They are selling the sweet ‘Nanas Madu’ which literally means ‘Honey Pineapple’.

Asinah who hails from Kampung Sawah says they sourced the fruits from a family member.

“He planted about 10 acres of pineapple so we do not worry about the supply.

“As far as I can remember, our family sells pineapples and I have been doing this business since young,” she said.

Asinah’s husband Ahmad said they usually remove the pineapple skin and sell the fruit for RM3 to RM6 each.

After paying their cost and expenditure, they bring home on average RM400 from pineapples alone.

Ahmad said the government encouraged the planters in his kampung to focus on pineapple.

“The economic benefits made it lucrative for planters and they get government aid such as subsidies and others,” he said.

According to Repok Assemblyman Dato Sri Huang Tiong Sii, the pineapple produced here is not sufficient for export but enough for the consumption of Sarawakians only.

“The main buyers of vegetables and fruits grown in Sarikei are from Sibu, Bintulu and Miri in the central region,” he said when met at his service centre office in Sarikei here yesterday.

Huang said pineapples from Sarikei region had huge economic potential if they could be mass produced to supply to Tanjung Manis and the rest of the world.