Tuesday, August 9
You are at:Home»Features»Friendship Park — Seeing is believing

The main entrance to the Park.

PEOPLE have been talking about how nice the Malaysia-China Friendship Park is. Many might have been driving past it everyday but never bothering to go in to have a look.

The park is located at Jalan Song, not far away from Kuching International Airport. Known as Taman Sahabat, it was built in 2005 on an impressive

2.8 hectares of land, allocated by the Sarawak State government, to commemorate the 30th anniversary of diplomatic relations between the two countries. The project was funded by the governments of Malaysia and China.

I made a short stop-over at the park recently, spending about half an hour walking around the ground and was awed by it.

This man-made park is big and has some interesting things to see and appreciate. Not only is it beautiful but also a nice place both for early morning meditation and evening walk or jog.

The park is usually frequented by Kuching residents and tourists,  especially during the evenings and weekends when people can go there to do outdoor exercise, and families to spend quality time together.

The park is also a popular spot for wedding pictures — so you may see a bride and groom having a photo shoot there. 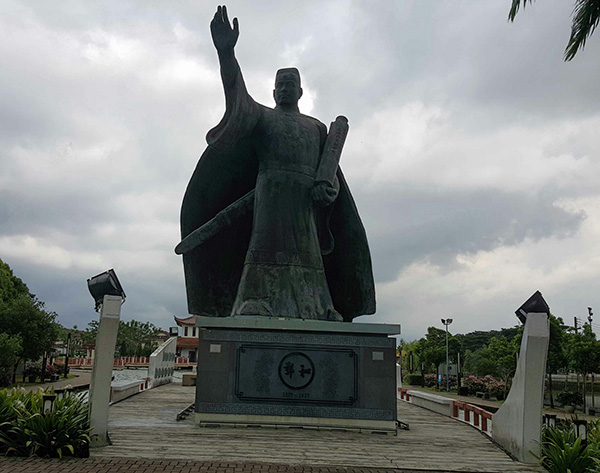 From my personal observation, the park has two main distinct areas — the Malaysia area and the China area.

In the Malaysia Park zone, there are elegant depictions of the country’s rich multi-cultural heritage and diversity, particularly those of Sarawak.

The Sarawak Fountain at the far end of the Park is one of them. It is actually a monument with seven arms overhanging a fountain.

The arms symbolise the major native tribes of Sarawak. Within the arms are the respective art works of each tribe. Sarawak has more than 40 sub-ethnic groups, each with its own distinct language, culture and lifestyle.

Next to the fountain is the Malaysia Murals — a series of 14 walls, seven on each side, facing each other. Each wall represents a state of Malaya (11 in all), Sarawak, Sabah and the Federal Territories.

It starts with the northern-most state of Perlis, loops down and then up peninsular Malaysia, then crosses the sea over to the East Malaysian states of Sarawak and Sabah.

Each wall has a mural, indicating an icon for each state. At the top is the state’s crest and at the bottom, a plaque with brief statement of what the state is renowned for.

The China Park area seems to incorporate the styles of Yunnan province with a Chinese gateway, friendship memorial tea pavilion, zig-zag bridge, Wishing Well, Beijing and Kunming pavilions and a 20-foot statue of Admiral Zheng He amidst elegant landscaping of Chinese flora, a water lily pond, a man-made lake, walking tracks and an open plaza for community activities. 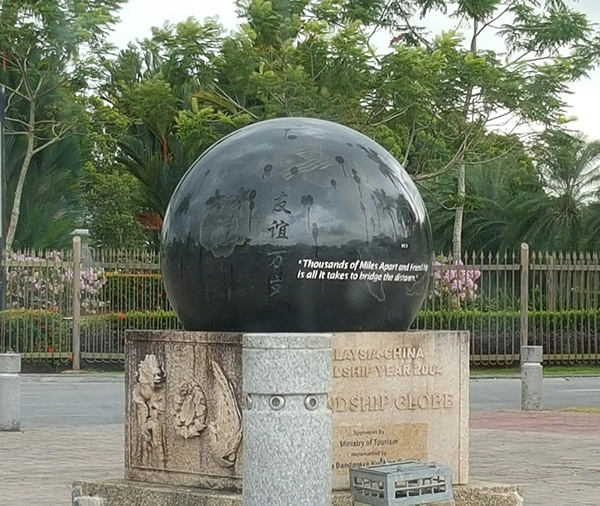 Apparently, the big statue of Zheng He is among the popular features in the park. In fact, it’s hit with tourists.

More often than not, first-time visitors will take every opportunity to have their pictures taken beside the statue.

He commanded expeditionary voyages to Southeast Asia, South Asia, Western Asia and East Africa from 1405 to 1433.

His larger ships stretched 120 metres in length, carrying hundreds of sailors on four tiers of decks.

As a favourite of the Yongle Emperor, whose usurpation he assisted, he rose to the top of the imperial hierarchy and served as commander of the southern capital Nanjing.

They finally stayed at China Hill, Melaka, and the mixed marriage from the society introduced the ancestry of ‘Baba and Nyonya’ until the present time.

The tall Cheng Ho’s statue at the Friendship Park is situated in front of a stone junk. His right hand stretches out in greeting while in the other hand, he holds royal diplomatic scrolls.

The admiral’s statue, standing between 30 and 40 feet tall, including the pedestal, is believed to be one of the largest statues of Zheng He in the world.

A close-up look shows a dragon emblazoned onto the admiral’s robe. The Chinese characters on the scroll can be clearly seen.

Both Cheng Ho’s statue and a stone platform-shaped Chinese junk were built at one end of the lake, facing away from the Tea Pavilion.

A junk is an ancient Chinese sailing ship design still in use today. It was used as a seagoing vessel as early as the second century AD and developed rapidly during the Song Dynasty (960-1279). 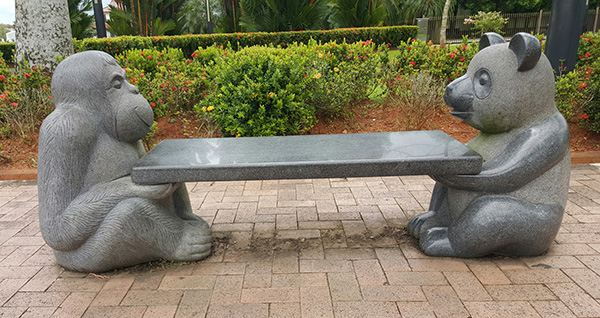 A stone bench resting on the palms of two statues — an orangutan and a panda.

One interesting feature at the main entrance of the park is a modern-looking metallic arch with a futuristic Malaysia-Sarawak design.

You can enter the park from Jalan Song but there is also a side entrance gateway that leads to the Tea Pavilion. At the side entrance is an impressive gateway standing on four columns. Atop the gateway is a two-tiered roof.

Entering the gateway is like going into a town in China.

Whether viewed from the sides, back or front, this gateway is magnificent, especially the smooth curves of the roof viewed against a blue sky backdrop.

The main roof consists of three roofs and its base is designed  with impressive Chinese architecture. On the roof eaves are detailed carvings in beautiful colours.

As you enter the park, you can also see the statue of a white stone lion guarding the entrance.

The view of the Tea Pavilion and the lake is captivating — a wonderful place to be any time of the day. To the left is the reddish Zig-Zag Bridge while the Side Gateway to the right.

At the far right is the Beijing Pavilion where one can view of the lake and the statue of Zheng He on the opposite side.

As well, the Pavilion is a nice place to have some tea amidst the greenery and water.

The Zig-Zag Bridge leads from the Tea Pavilion over the lake to the Kunming Pavilion. At the centre of the bridge is a Wishing Well where people may throw in some coins and wish for good health, wealth, marriage and children. 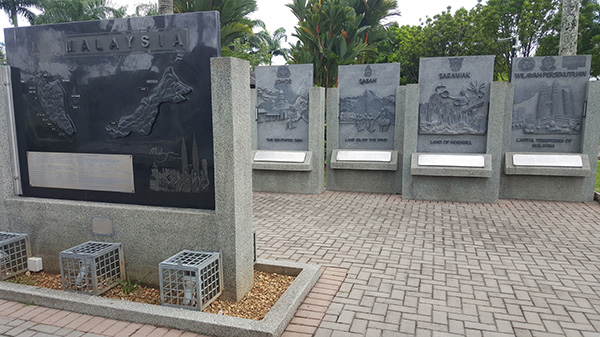 Gardens — large and small — are other prominent features at the Park. A garden with a reflexology path called the Path of Good Health was created near the Beijing Pavilion. Guidelines on how to use the path and the effects of reflexology on parts of the body are displayed on a signboard nearby.

As you walk along the pathways near the gardens, you will come across interesting benches with animals holding them up.

There is a big pond with plenty of fish. Visitors can feed them but only with fish feed bought at the designated stalls.

There is also a stylized statue of a combo elephant-hornbill, with the elephant’s trunk raised high and the hornbill’s beak sticking out from below.

Then, there is a Friendship Globe that sits on a stone.

Imprinted on the globe are the leaders of the two countries (over the past 30 years) shaking hands as a sign of friendship.

It is understood that the complete walking path at the Park is about 2km in radius.

The park is well maintained, clean and has good security.