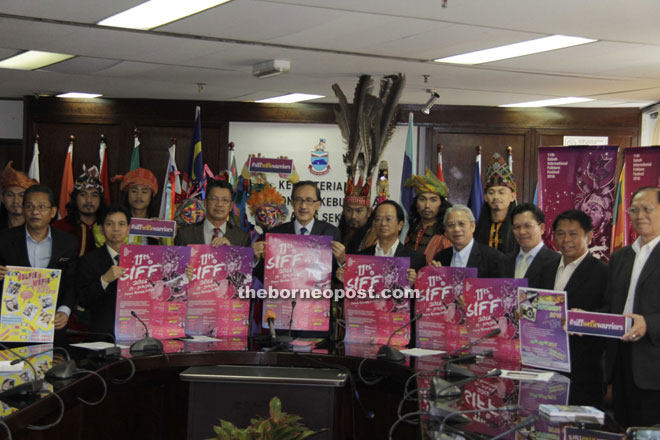 Masidi (fourth left) with the posters that will be used to promote the 11th SIFF.

KOTA KINABALU: A total of 11 countries will take part in the 11th Sabah International Folklore Festival (SIFF) scheduled to take place on July 28.

He added that the participants were required to pay a fee of USD30 for each of their members.

The fee would go towards paying for the cost of organising the festival.

Meanwhile, the festival would be launched by Chief Minister Datuk Seri Panglima Musa Haji Aman on July 28 at the Penampang Cultural Centre at 7pm.

The finale of the event would be held on July 30 and would be attended by Head of State Tun Juhar Mahiruddin and his wife Toh Puan Hajjah Norlidah R.M. Jasni.

He said a photography competition would also be held and photographers covering the events from July 25 to July 30 are encouraged to take part.

The participation fee is RM30 per person.

In addition, a selfie and wifie as weekly quiz will also be held. The closing date for participation is July 29.

Further information concerning the festival and competitions is available at the Sabah Art Gallery.

Meanwhile, tickets for the 11th SIFF are now on sale at RM30 per adult and RM10 per child and students 17 years old and under.