Saturday, May 28
You are at:Home»News»Sabah»Beauty to promote Rungus culture 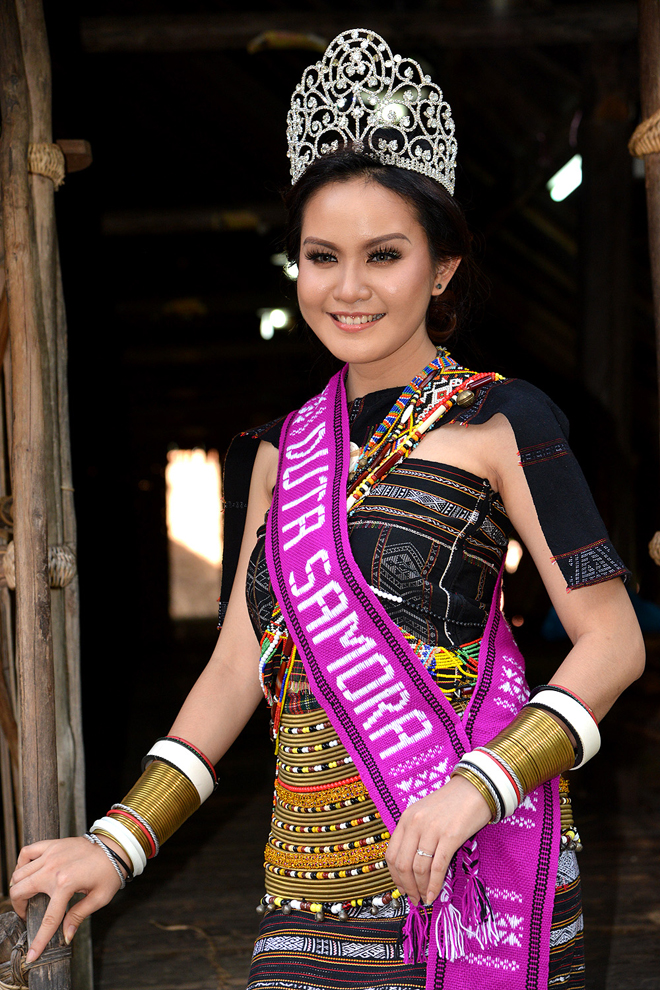 Claryssa wearing the ‘tapi’ at the State Museum as part of her effort to promote the traditions of the Rungus.

KOTA KINABALU: Claryssa Henry Ogodong may not have won the Sabah’s Unduk Ngadau 2016 crown, but she is a queen nonetheless in promoting the Rungus culture and traditions.

Having recently been re-appointed as the ambassadress of the Sabah Rungus Momogun Association (Samora), Claryssa, who was the first runner-up in the recent State-level Unduk Ngadau contest endeavours to raise awareness concerning the Rungus traditional wear and musical instruments.

And how does she plan to do that? For starters, she will begin with herself.

She explained that she has begun wearing the traditional Rungus attire called the ‘tapi’ and the ‘sukolop’ to formal events, including contests that she took part in.

“The ‘tapi’ is well known but not so the ‘sukolop’ as this is considered as something that a woman wears at home and too simple for formal events. It is also something the Rungus women wear to the farm to work,” she said.

She elaborated that the ‘tapi’ is fully woven by hand while the fabric used to make the ‘sukolop’ is thinner and not as elegant looking as the ‘tapi’, which probably explains why it is less recognized.

“When I decided to wear the ‘sukolop’, I received a lot of objections, but I went ahead anyway,” she said. As a result, more people are becoming aware that the Rungus women have two types of traditional costumes, both, of course, look just as beautiful.

Claryssa, a marketing graduate, said that she started to see the beauty of the cultures of her own people while studying in Sarawak.

“The mentality of the people in Sarawak is so different from ours. They have such high regard for their traditions and cultures and the women there always wear some form of traditional accessories or attire even when they go to church,” she related.

From there, she began donning accessories that were part of the tradition of her own people, she said.

“Some people are afraid of looking ancient or outdated when they don traditional accessories. I hope to change all that,” she said.

Claryssa also hoped to promote the local musical instruments of her people such as the Sundatang, a two-stringed instrument; the Tontog, a drum; the Turalli; and the Turuding.

She said that she hoped to acquire the assistance of a musician and researcher from Germany whom she met while promoting the Rungus culture and dance at the Internationale Tourismus Borse in March this year.

“I was surprised when the researcher told me that he had researched the Sundatang,” she said.

She hoped to be able to conduct her own research on the two facets of her culture, which are fashion and music in the near future.

She also mentioned about documenting them and is keen to see the designs that are based on the traditional wear of the Rungus people being commercialised in the future. However, those are her future plans.

For the moment though, she hopes that her pride on her cultures and traditions will be translated into something that could help sustain the culture in the future and hopefully encourage youths like her to take similar steps to ensure its longevity.