Monday, July 4
You are at:Home»News»Sabah»Majority of 600 who quit not Umno members – Tawfiq 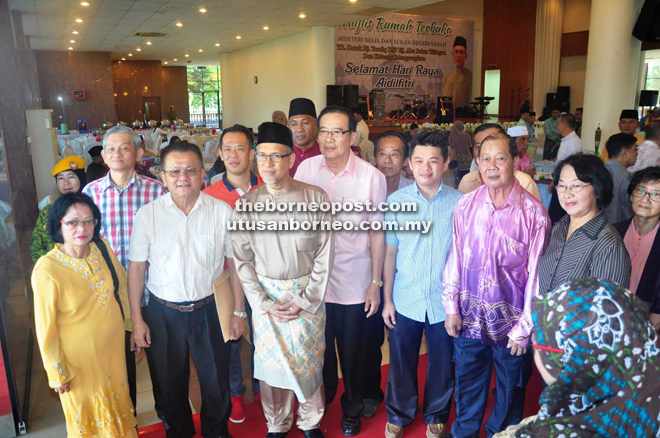 Tawfiq (third left) with the Chinese community at the Hari Raya open house.

TAWAU: Most of the 600 Batu Sapi Umno members, who quit the party recently following the suspension of the party’s former vice president Datuk Seri Shafie Apdal who later resigned, were non-Umno members.

Disclosing this yesterday, Youth and Sports Minister Datuk Tawfiq Abu Bakar claimed that most of those who quit were from the opposition.

Tawfiq said some of them were also from the suspended Umno branches due to insufficient quorum and bankruptcy.

He believed that many of them had been fooled while attending the Hari Raya Aidilfitri feast.

Tawfiq said Umno had yet to receive their resignation letters.

“We hope the people would remain calm and focus on defending Umno for the sake of the people’s fate and to develop the country,” he told a press conference during his Hari Raya open house held at Lau Gek Poh Foundation Building here yesterday.

On the the three Indonesian fishermen abducted from a fishing trawler by five armed men in the waters off Lahad Datu, near Sinakut, about 3.6 nautical miles last Saturday night, Tawfiq regretted that such incident was still occurring in spite of the current curfew and the presence of security forces.

He hoped that the enforcement team could strengthen its surveillance and security for the sake of the tourism industry development and public confidence.

At the meantime, he encouraged all fishermen to install security equipment on their fishing boats to deter pirate attack and to provide tip-off to the enforcement authority in the event of kidnapping.

“I also call on the fishery industry to remain calm and leave the matter to the enforcement authority while hoping the abducted three fishermen can be released as soon as possible,” Tawfiq added.

Previous ArticleTrio given recognition for assisting in Ranau quake
Next Article Shooting: Minister’s brother to know fate on August 9