Tuesday, May 24
You are at:Home»News»Sabah»Mother stricken with cancer, son paralyzed 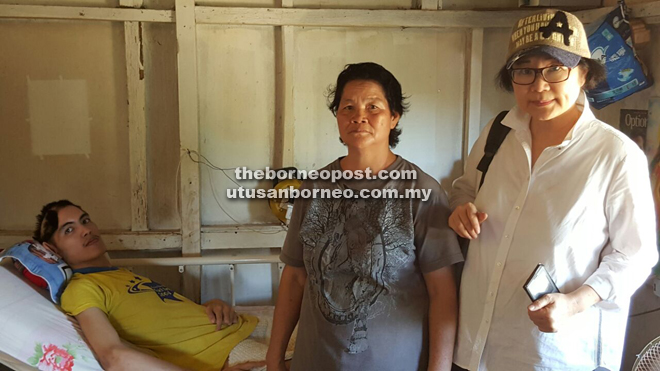 Liew (right) with the mother and son at their home.

KOTA KINABALU: A group of volunteers, after hearing about the plight of a woman diagnosed with stomach cancer caring for her bedridden son, visited them at their house in Kampung Muhibbah in Manggatal two days ago.

Among those in the group was Api Api assemblywoman Christina Liew and they brought along with them care packages, well wishes and prayers for the mother and son.

The group was informed that the mother suffers from third stage stomach cancer and is now getting chemotherapy treatment from the public hospital.

Her son had an accident in 2010 when he fell from the second floor of a building. He suffered a fractured skull and subsequently had a stroke, causing him to be paralyzed from waist down and is now bed ridden.

The impact of the fall also resulted in his skull being so badly fractured that a part of it had to be surgically removed. Prior to the accident, he was a part-time worker for City Hall.

He told Liew and the volunteers that there was no compensation paid to him ever since the accident.

Both mother and son are unable to work any more and are dependent on the kindness of the public and volunteers to assist them to meet their daily needs month to month. Even the humble house they are staying in is with provided through the kindness of the local church.

During the visit, the mother requested for financial assistance from City Hall or a relevant authority to upgrade the road to their house, which is located some distance away from the main road.

She said she has to walk for quite a distance to the main road to take a bus to the hospital for her treatment. During rainy days, the road becomes muddy and makes it hard for her to get out of the house.

Liew promised to enquire from City Hall, since the son was an ex-employee, if he was covered under a workman’s compensation scheme or any kind of financial assistance covered for workers.

She said she will also follow up with the Welfare Department as to whether some kind of financial assistance can be extended to them. She hopes the relevant departments will evaluate their condition and be able to render some kind of assistance to them.