Monday, August 15
You are at:Home»News»Sabah»Trio given recognition for assisting in Ranau quake 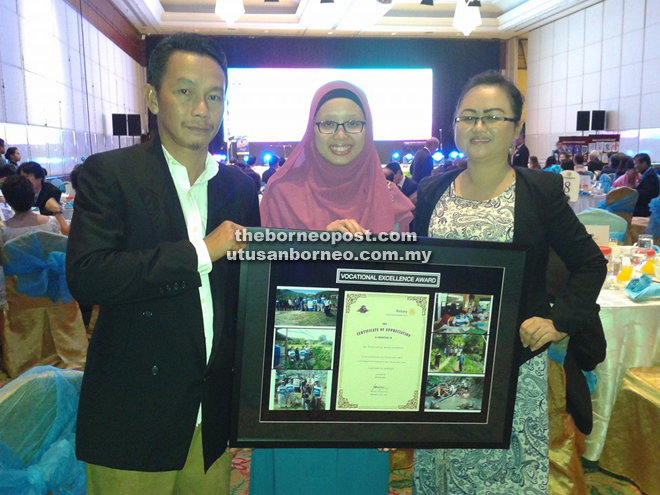 From left: Aznan Johan, Maya Ramdan and Esther Toinin who were awarded the Excellence Vocational Award by the Rotary Club of Kota Kinabalu South recently.

KOTA KINABALU: The Rotary Club of Kota Kinabalu South has awarded the Certificate of Appreciation for the Excellence Vocational Award to three individuals for their assistance during last year’s earthquake disaster in Ranau.

The trio from Kota Belud namely, Maya Ramdan, Esther Toinin and Aznan Johan received the recognition during the 28th anniversary celebration of the club recently.

In presenting the award, Immediate Past President Leslie Yap recorded his appreciation for the three who had helped to ease the burden of the villagers in Kota Belud by coordinating to get assistance from NGOs such as Rotary Clubs during the ordeal.

“Maya and a few others had continuously done amazing work by coordinating their tasks in contacting us for assistance. They alerted us on the urgency needed by the people in Kota Belud. Since then they continued to coordinate with us and those involved in order to ease the burden of the villagers at that time. I am proud to present this recognition award to them for their voluntary services and for having a big and caring heart to help their own people,” applauded Leslie.

Maya, who works as the School Improvement Specialist Coach with the Education Department in Kota Belud, recorded her gratitude for the recognition given, saying that it was the teamwork performed by all parties that made it a success in assisting the villagers.

Two others who received the same award were Esther, a school teacher from SK Kulambai and Aznan, a contractor.