Sunday, February 28
You are at:Home»News»Sarawak»‘Use food experiences as tourist drawcard’ 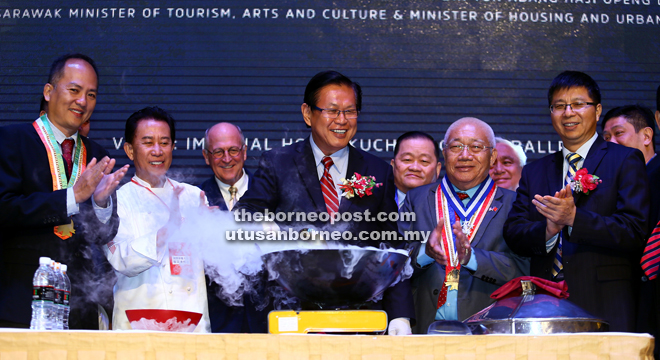 Lee (fourth left) officially launches the event. Yan is at second left, while Goh is at front second right.

Lee (front 13th left) is seen in a group photo with participants and organisers. From front 11th left are Ik and Goh. 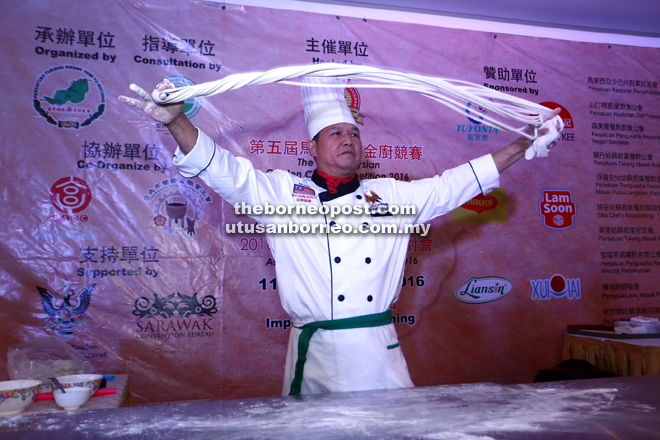 A chef displays his noodle-making skills at the exhibition area. 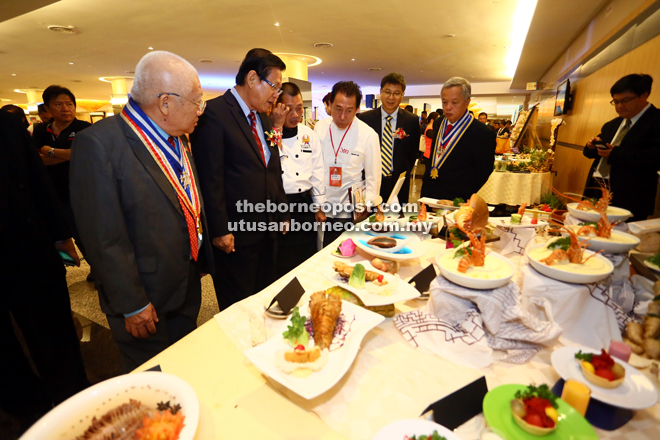 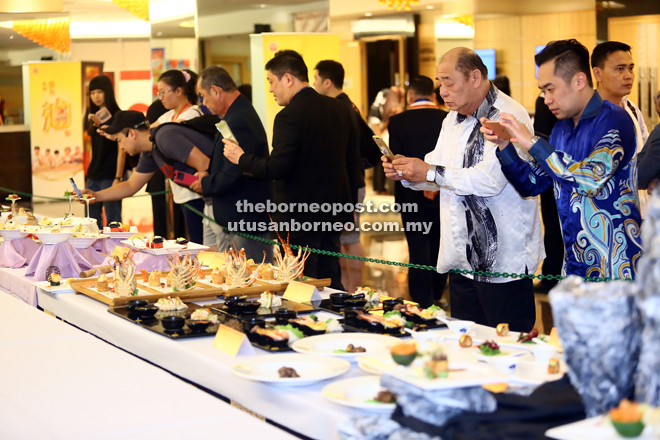 KUCHING: The lure of unique and delicious local food experiences can be used as part of a holistic approach to draw more tourists to Sarawak.

Assistant Minister of Tourism Datuk Lee Kim Shin said the state needs to do more to highlight local cuisine as some visitors are willing to fly in just to sample Sarawakian specialities.

“We had businessmen recently fly from Hong Kong to Kuching just to try our empurau. You can see how food is an important component of tourism,” he told a press conference after launching the Fifth Golden Chef Competition 2016 Asia Pacific (Kuching) Master Chef Challenge Trophy and Culinary Forum yesterday.

“That is why we need local chefs to be more creative and innovative. We have to come up with branding and names. We have a lot of local ingredients around. What we need are good chefs to come up with new menus.”

He said the competition provides an opportunity for local chefs to upgrade their skills and elevate local specialities such as ayam pansuh, umai and tuak.

“There are a lot of things we still can do with our Sarawak cuisine,” he said.

“We must package it in a way that interests the tourists. We must make Sarawak tourism unique and interesting, and set it apart from other parts of the world. Why should they go to Sarawak?”

He added that the Ministry of Tourism, Arts and Culture is looking into revamping its approach to promotion and marketing.

“I’ve already met with Sarawak Tourism Board (STB) and Business Events Sarawak (formerly Sarawak Convention Bureau). This week I’ll be sitting down with STB and going into detail over changing some of our promotion and marketing. Similarly with BES, new strategies and approaches,” he said.

It involves over 500 participants, more than half of whom are international participants from China, Taiwan, Hong Kong, Macau, Singapore, the United States, South Korea, and Indonesia.

Among those present at the opening were Tourism Ministry permanent secretary Datu Ik Pahon Joyik, Consul General of the People’s Republic of China in Kuching Fu Jijun, organising chairman Goh Ah Seng — who is Kuching How Yu Chefs Association founder, and culinary consultant Martin Yan — host of the long-running ‘Yan Can Cook’ show.

Previous ArticleManny Pacquiao plans to fight again this year
Next Article Will Rio Olympics be a security ‘hell’?