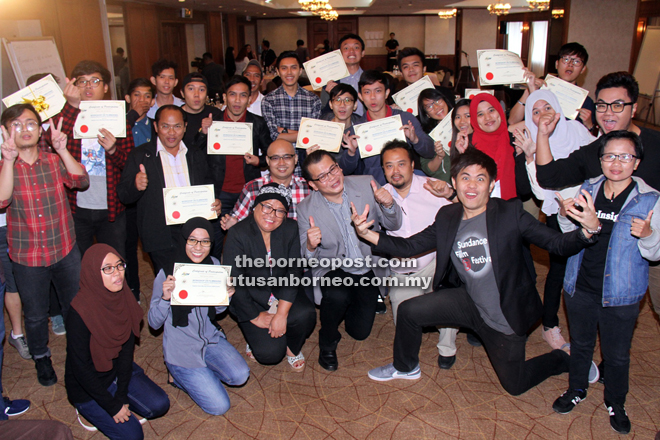 Participants gleefully striking a pose in a photo-op with workshop speakers and Azam personnel. Also seen is Mohamad Ariff (front, fourth left). — Photo by Chimon Upon

KUCHING: With the advent of modern information communication technologies (ICTs) such as the Internet as well as media convergence, visual mediums such as short films are increasingly popular channels to communicate or access information – rivalling the reach and impact of more traditional mass media such as print and broadcast.

happenings, is crucial. This is to ensure that communities and individuals are able to make well-informed decisions and choices about various important matters.

“These include matters on education, on livelihood and career, on business, on the well-being of their community, and, on how to be good and productive citizens,” said Azam Sarawak honorary secretary Mohamad Ariff Irwani.

As an organisation that seeks to promote development communication (devcom) in Sarawak, Azam hoped that with better skills and knowledge, local film makers would be able to produce more films which showcase positive values about Sarawak, such as its cultural vibrancy and rich cultural heritage, social harmony, natural attractions, and economic growth potential.

“New technologies and innovative filmmaking today is also opening up new opportunities for emerging filmmakers. Through efforts such as this workshop, Azam hopes to support and complement the state government’s efforts in encouraging the growth of the creative industry in Sarawak.

“With a strong pool of local talents in film production such as writers, technical experts, directors, actors and musicians, it is hoped that Sarawak could become an attractive centre for filmmakers from around the world carry out their film projects here,” he added.

Azam board member Alice Wee, who is also a senior staff with RTM Sarawak, moderated the workshop panel session.

About fifty film enthusiasts – including contestants of Azam’s recent short film competition organised in collaboration with the state government – attended the workshop.

Mohamad Ariff hoped that the workshop would motivate and strengthen local talents to contribute to the growth of the creative industry as a while. The organisers would also strive to forward ideas and recommendations from the workshop group discussions to the relevant authorities and stakeholders for consideration.