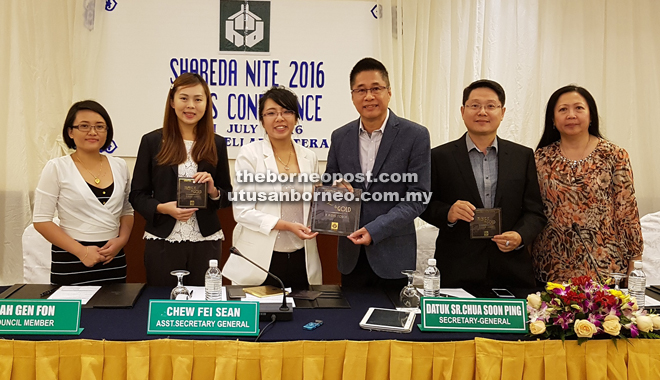 Its secretary general, Datuk Chua Soon Ping, said the government’s 2015 crackdown to cool down the property market had turned into a market slump today.

“Everybody is affected, especially the first home buyers. The first home buyers that are affected find it very difficult to come up with 20% to 30% of the down payment,” said Chua at the SHAREDA Nite 2016 press conference here yesterday.

“I know many of us, if you work less than five years it is hard to buy a house.

“Actually the government had come up with My Scheme, MyDeposit and a lot more for these affordable houses. Yet these are not filtered down to the first home buyers. So we want the government to look into this so the first homes are delivered quickly to the people who are actually helpless,” he added.

On the DIBS matter, Chua hoped that the government will consider allowing property developers to absorb the loan interest of first home buyers so they can purchase units with a 10% deposit through the incorporation of the scheme in the National Budget 2017.

The Shareda Nite 2016 Black & Gold – A Midas Touch theme symbolises its members’ motivation to turn every potential opportunity into golden ones.

Shareda assistant secretary-general (2015-2017) Emily Chew Fei Sean, who is also the organising chairperson of Shareda Nite 2016 taking place on July 30, said part and parcel of the association’s presence was to help boost the economy by injecting positive and encouraging sentiments into the market to ultimately help economic growth in Sabah.

“As we are experiencing challenging times and considering the softer economy, Shareda will not dwell in heedlessness and instead pursue and advocate for the continuous growth of the property and real estate industry,” Chew said at a press conference held here yesterday.

“We won’t simply be so vulnerable and not do anything, just sitting back at the coffee shop and talking about the problems that we are facing, but rather as an association we will continue to pursue interests of our members and the industry.

“The theme resonates with the golden touch of our developers and associates, who can turn every challenge into a golden opportunity,” she added.

Shareda is also looking forward to celebrating its members’ corporate social responsibility (CSR) efforts and achievements such as its Youth Wing’s Charity Project of building the RM200,000 Wallace Blind Centre in Tuaran, which is anticipated to be launched before the end of the month by Local Government and Housing Minister Datuk Hajiji Noor.

“One of the highlights of programme for the evening would be a special tribute presentation to our members who have ceaselessly given love and care to the environment and community at large,” Chew said.

“Apart from that, we would be presenting our appreciation to one of the most efficient government departments in processing the certificate of fitness for occupation (OC) for the completed development projects.

“This year, we will be acknowledging the Fire and Safety Department of Sabah (Bomba) as one of the most efficient government agencies and departments in terms of processing our OCs for completion of our development projects.

“We will present a drone to the representatives from Bomba for the safety and rescue mission of the fire and rescue team in the future,” she added.

Besides that, Shareda had also taken up efforts to help the Kendara Apartment folks to attain their strata titles by taking out RM500,000 to pay for the survey fees and stepped in to advise on the 1Sulaman project.

“Shareda, with the group together, are 182 and we are also doing our part,” Chua noted.

“Not only is Shareda an NGO, not only looking after the 182 members, we are actually looking far beyond our duties. This message must be very clear and precise. I know the members sometimes complain to me because I am the secretary general, I am more or less their punching bag,

“Basically, as part and parcel of our job, it’s not just the members we are taking care of but the other industries as well. If we fail to deliver, the other industries will be affected as well, such as the subcontractors, labour and suppliers. This, I believe, is part of the chain reaction of all the industries,” he stressed.

Meanwhile, Chua announced that the Shareda Property Exhibition (PropEx) 2016 will be held from September 15 to 18 at the Sabah Trade Centre in Likas.