Tuesday, August 3
You are at:Home»Columns»Perspective»Eat your heart out! Aristotle 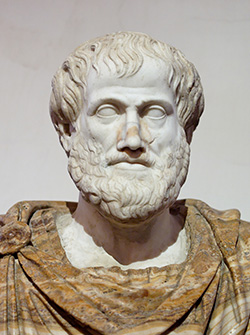 NEARLY 2,500 years ago, Aristotle (384BC to 322BC), Greek philosopher, logician, and scientist, wrote down the formula to being a persuasive speaker. This formula which forms the basis for nearly every public speaking book written since then is about the three pillars to persuasive speech, namely, ethos, pathos and logos. (Rhetoric written in 350 BCE.) Perhaps these concepts are all Greek to many of us so let me throw a bit of light on them.

Ethos is about credibility. This is the first level of judgement by an audience on the speaker – whether he can be trusted. Should one lend him one’s ears, or take it with a pinch of salt, or even drift off quietly to snoozeland.

One motivational speaker whose special topic is ‘You Can Be Rich!’ once said, “You cannot get your audience to listen to you if you arrive in a old beat-up second-hand car.” True to form he started his presentation with a slide of him standing in front of his two very expensive cars. But what endeared him to his listeners was the next slide, which showed his younger self as a poor labourer. “I am going to share with you my journey from here (pointing to the photo of his poor former self) and to here. Perhaps you can draw some lessons from it.” You bet he had oodles of ethos. He was saying that he did not get the tips to success from some books but rather from real life experiences.

The next up is pathos. It appeals to the emotions of the audience. It is speaking to their hearts to evoke their feelings. Emotional connection can be created in many ways by a speaker, perhaps most notably by stories, anecdotes, analogies to link an aspect of the message with the intention to trigger the desired response from the audience.

If pathos speaks to the heart then logos addresses the mind. It is to win over the audience through logical argument. It is to provide substance to the speaker’s message. It appeals to the common sense of people.

This treatise written in 340 BCE has been accepted and followed by orators since then. The three elements taken together do indeed form the foundation of a persuasive speech. However, I do not know what happened in the intervening years, perhaps humans have evolved (maybe more correctly, devolved). It seems now many are no longer concerned about logical substance of an argument. It seems some people have devolved into unthinking cretins. In these last few years miscreants have carried out horrible inhuman deeds based, it seems, on the exhortation of some speaker/preachers who merely employ two of the three Aristotelian pillars of persuasion – ethos and pathos. Logos is now is consigned to the dustbin of the mind. Common sense is really not common any more.

Some people assert that it is the intent of tyrants and dictators to emaciate the minds of their subjects. As one Malaysian social activist said, “They want to ‘bonsify’ the minds of the citizens.” I find the term “bonsify” which he coined rather cute and appropriate. It conjures up the image of a deformed and stunted tree that was not allowed to grow to its full potential. Others decry the general deterioration of education. “The failure to teach students to recognise, value and respect good reasoning is one of the most significant failings of education today,” wrote Paul, R and Elder, L in 1996 for their online publication at www.criticalthinking.org.

This ‘uneducational’ school system is developing a generation of people who are unable or unwilling to employ the faculty of reasoning. The end result is that demagogues and charlatans are having a field day.

Witness the proliferation of get-rich-quick schemes. Recently a friend invited me to a seminar by a so-called hotshot from Singapore. He was to introduce a scheme which was supposed to give us an income of thousands of dollars in weeks without having to step out of our room and away from our computer. He came with a string of academic titles as well as work history with a number of well-known wealth-makers. He was flanked by a couple of rather fetching executive-looking young ladies. He himself carried an immaculately expensive and successful look. Well, that took care of the ethos (credibility) bit I suppose. The presentation was purely pathos. He appealed to our emotion of greed, our laziness – “This is all passive income, you don’t have to do any work. Just follow the system.” Fortunately, the guardian angel of my mind was screaming, “If it is too good to be true, then it is too good to be true.” I hightailed out of there and had a bowl of laksa at the next-door coffeeshop instead.

Perhaps I need not dwell too much on this. This last week we have been saturated with news of MLM, Ponzi and outright scams. So, the readers know what I am getting at. In sum, all the persuasive presentations of the scammers are heavy on ethos and pathos but zero on the logos.

So far we have been talking about money and wealth on earth. It gets lethal and evil when people are scammed into doing things that would supposedly guarantee them infinite wealth in the next life. Look at those young murderers from Bangladesh. They were so overwhelmed by the aura of the person who inspired them and the promise of eternal bliss that they never once stopped to think, “Wait a minute, we have 99 superlatives to describe our God, how is it possible that He wants us to commit brutal murders so that we can gain a place beside Him?”

So, Aristotle, so much for your theory of the three pillars of persuasive speech. Our human experience proves that it suffices to have only two pillars to make people move mountains and empty seas.