Tuesday, June 15
You are at:Home»Features»Spelunking in a mystical cave

The inside view of the main chamber from the direction of the emanating skylight. 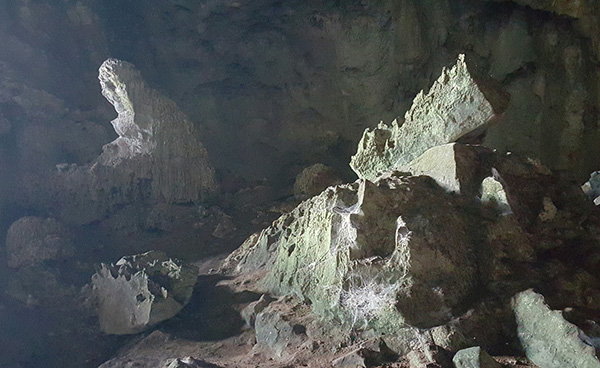 Some interesting rock formations in the cave.

THE cave is notable because of its connection to legend.

To the local Bidayuhs, the human-like rock formations inside the cave were formerly real people.

According to folklore, there used to be a village near the cave. But because of their cruelty to a pair of orphans, the villagers were cursed and turned into stone.

The two orphans wanted to participate in a festival held in the village but the villagers made fun of them before chasing them away.

For the villagers’ heartless treatment of the orphans, fairies were said to have put a curse on them. That’s how the cave got its name — Fairy Cave or Gua Pari as the locals call it. I have heard about Fairy Cave, situated near Bau town, since I was a teenager but it was not until recently that I managed to see it for myself. I tried looking for some of the rock formations outside the cave around the foot of a mountain but didn’t see any as the fenced up area was covered with vegetation.

There are also claims Fairy Cave takes its name from a stalagmite structure at its entrance, said to resemble a Chinese deity.

That claim could have come about because the cave has long been frequented by the Chinese living in the area and from afar. Even today, debris of joss sticks left behind by deific devotees can still be seen strewn near some of the rock formations inside the cave.

The superstitious Chinese come to pray at these stone figures, believing they are representations of spiritual beings. 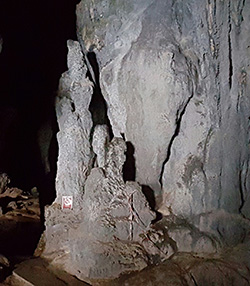 The rock formation of a humanoid figure.

What is a fairy?

Some have associated fairies with pagan myth or religion. They are generally thought of as supernatural beings living alongside humans, possibly within a slightly different dimension.

Some myths have it that fairies are either immortal or extremely long-lived, and come in a variety of usually humanoid shapes and sizes.

Anyway, what constitutes a fairy can change from culture to culture and tradition to tradition. However, a few things carry across whereby most are of the idea that a fairy is a being of mystery and possesses power.

According to some beliefs, the fairy has assumed the role of a kind of pretty genie, relegated to such work as making wishes come true and hauling off fallen teeth.

The pictures of the fairy that we come across in today’s media show them as benevolent, wise, and kind.

They bestow gifts on Sleeping Beauty or help Cinderella out of trouble or act as a sidekick to a boy who does not grow up. Hence, the term fairytales.

Interestingly enough though, while popular culture today reveres the fairy as a creature of good, it hasn’t always been so.

In the past, fairies were thought to be suspicious creatures, mischievous in the best of times, and downright evil in the worst. They were blamed for missing children, certain illnesses and bad luck during travel.

Folklore pertaining to the origins of fairies are varied. One school of thought insists they are the spirits of the dead while another claims they are fallen angels — cast out of heaven — yet not evil enough to be thrown into hell.

While these ‘dark angels’ could roam the earth, they were still subjects of the devil and must pay him a tithe — usually in the form of children or wayward travellers.

Still another theory espouses that fairies are a distinct species altogether — in the manner of Big Foot or Yeti.

Yet, it’s not just the fairy’s origin that is being debated. Even their very appearance is uncertain.

Sometimes, they’re described as tall, willowy and enchantingly beautiful, other times as dazzling, winged and no bigger than a foot called a demifey.

On some occasions, they may possess a magic wand, and at others, no wand at all.

Anyway, as soon as I came out of the car on arrival at Fairy Cave, I looked up at the sheer limestone cliff in front of me. Next to it was a four- to five-storey concrete stairway.

While ascending the flight of steps, I turned aside to look at the limestone wall and noticed a smaller set of stairs running closely to the rocks. It was steep, narrow, and looked very dangerous to climb. I guess it could be the old stairwell used by visitors or tourists in the past to reach the mouth of the cave.

On reaching the top, I discovered there were more steps to climb. Altogether, I climbed 185 steps to reach the entrance of the cave. There, I saw interesting stalagmite and stalactite formations. 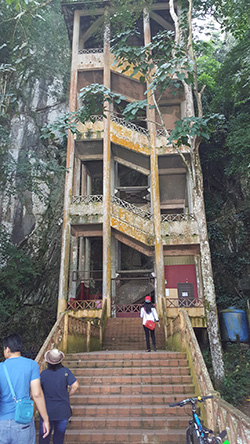 The stairway to the mouth of the cave.

I found it quite easy exploring the cave as there is a concrete path and a belian staircase for climbing up a narrow steep tunnel — apparently the darkest section near the entrance.

The tunnel leads to the main cavern, and after climbing up the plank-steps, you get the first glimpse of something even more awesome! It’s the very well-lit gargantuan chamber with soaring ceilings that disappear into the shadows high above. Inside the chamber, most cavers should be able to see their way through without much problem.

As we entered the main chamber, the incessant chittering of bats was audible but the nocturnal winged mammals were barely sighted in the emanating sunlight that shone through a large hole in the middle of the limestone mountain.

Probably because it was daytime that I could not hear the flapping of wings from the cavern ceiling but a faint stench of guano lingered in the air.

And as you looked into the chamber, it was hard to believe you were standing inside the hollow heart of a mountain. Your imagination started to run wild, taking you to a lost world from the Stone Age.

The main part of the cave is a huge open area, lit by sunrays filtering in through a large hole on the mountainside. Stalagmites, stalactites and a surprising amount of greenery are clearly visible.

The size of the main cavern is hard to gauge. It’s huge — no question about it — and once inside, it’s easy to spelunk, using man-made staircases.

Torches are recommended as you may want to see some of the cavern features shrouded in darkness.

As you reach the upper level of the main chamber, you could see a lot of interesting rock formations, some resembling figures and animals, among the shadowy recess.

Apparently, superstitious Chinese visitors are still making offerings at some of the humanoid-shaped stalagmites as piles of burnt-out joss stick residues around their base can attest. 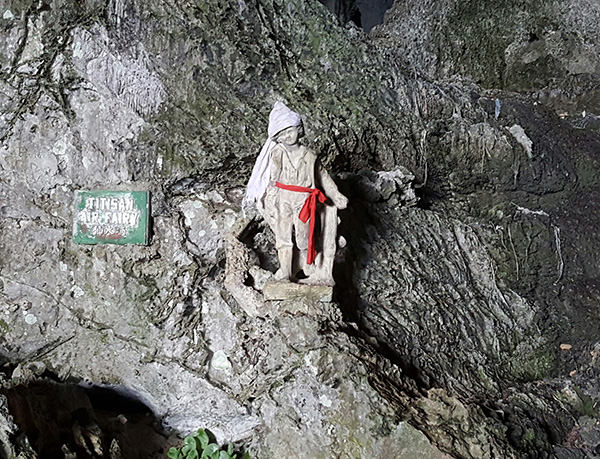 A child-like figure placed in the cave.

Among the stalagmites, there is one which the superstitious believe looks like the statue of Kuan Yin, the Goddess of Mercy.

Nearby is a depression on the cave floor, shaped like the giant footprint of big creatures, believed to have inhabited in the cave thousands of years ago. Perhaps, the legendary resident fairies were very large and heavy-footed.

About three metres from the footprint, right at the centre of a cave, someone has placed the statue of a child-like figure adjacent to a huge rock. A black robe is draped over its shoulders, a white cap placed on its head and a red sash encircles its waist.

Near the figure is a green plaque, embedded into the rock, with three words: Titisan Air Fairy — literally Fairy or Fairy Water Drops. What it’s supposed to represent, only the placer knows.

Surrounding the figure were evidence of materials used for worshipping.

There are also benches for cavers to sit and rest their tired legs. The view outside, visible through the huge hole at the edge of the cave, is definitely worth the walk to the top.

Near the huge hole, where the skylight shines through, you can see a complete uvula-shaped stalactite at one of the mouths of the smaller caves within the main chamber.

From the top on both sides of the cave, sunlight bathes the cave floor, making the environment conducive, especially for the growth of lichen and moss.

The combination of light, water and thin, guano-enriched soil also allows plants, mostly ferns, to survive on the floor of the main chamber.

Unfortunately, unlike the caves in Mulu, preserved in pristine conditions under stringent rules of the park authorities, the rock formations in Fairy Cave are unguarded and unprotected.

Today, Fairy Cave is gazetted as a Jungle Park by the Forest Department which develops it.

For visitors, it is advisable to put on non-slip footwear and stick to the designated paths for safety. A visitor stands near a mouth-like opening in the cave with a uvula-shaped rock formation jutting down from the roof. 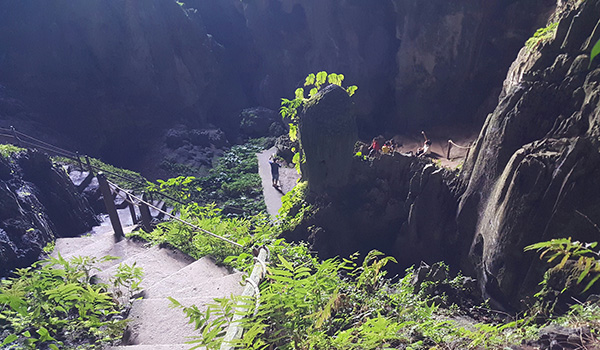 The view of the cave from the top of the chamber against the direction of the emanating skylight.

Previous ArticleEat your heart out! Aristotle
Next Article Tusan Beach — an awesome getaway