Tuesday, August 4
You are at:Home»News»Sarawak»Body with tattoo found near log pond 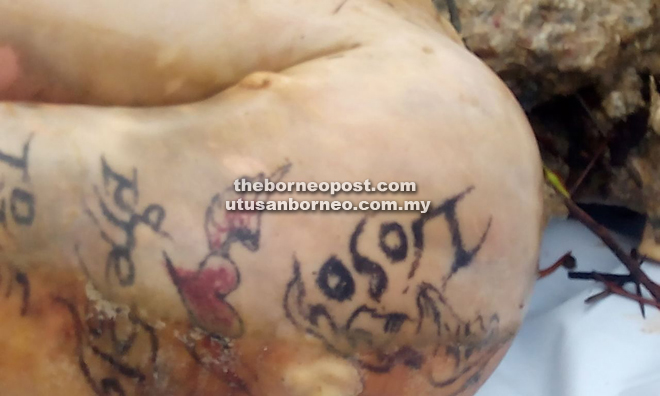 ‘LOSO THE BIG LOVE MESSY’ tattoo on the left shoulder of the body.

SARIKEI: The police here are seeking the assistance of the public to identify the decomposed body of a man found floating near a log pond in Tanjung Manis near here last Sunday.

Local district police chief Supt Mat Jusoh Muhammad said upon being informed of the gruesome discovery by a manager of a timber camp there around 9am last Sunday, his men in Tanjung Manis Police Station rushed to the scene to investigate.

He said on arrival at the scene, his men saw the body of a man floating face down in the river and after retrieving the naked body, they noticed a tattoo of a dragon on its back and wordings ‘LOSO THE BIG LOVE MESSY’ on the left shoulder.

Police are having difficulty in identifying the about 160cm-tall and dark-skinned body as there was no identification document found on it, and there has been no report of a missing person lodged at Tanjung Manis Police Station in the past few days.

While other parts of the body were intact, what remained of the head was only the skull, he said, adding there was no injury on the body to suggest any foul play.

In view of this, the police are calling on the public especially those who have any family member missing in the past few days who match the given description to come forward to identify the body which has been sent to Sarikei Hospital.