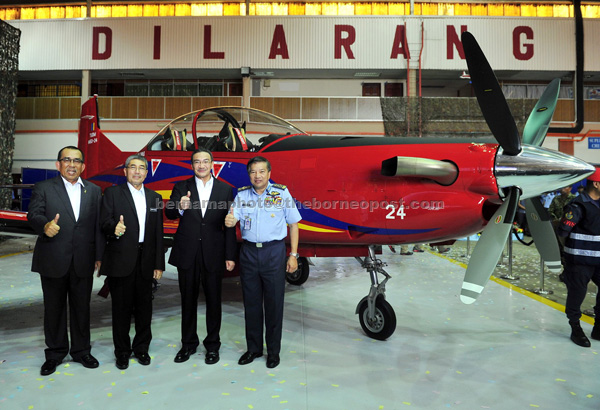 (From left) Johari, Ahmad Bashah, Hishammuddin and Roslan at the RMAF’s Hari Raya celebration and launching of the Pilatus PC-7 Mk II aircraft and EC 120B helicopters. — Bernama photo

“The addition of the new flight training assets will improve the efficiency, ability and effectiveness of RMAF in defending the security and sovereignty of the nation’s air space,”he said.

He was speaking to the media after attending RMAF’s Hari Raya celebration and launching both air assets at KTU here, yesterday.

Hishammuddin said the acquisition of the new aircraft, making the total Pilatus PC-7 Mark II owned by RMAF to 21, which were received in stages since 2007 to replace the former Pilatus PC-7 which has been used for 33 years.

The PC-7 MK II is powered by Pratt & Whitney PT6A-25C turboprop engines which is able to produce as much power as 700hsp.

The single engine EC 120B helicopters were acquired to replaced the former Alouette III helicopters, specifically to give early exposure to the pilots on the operation of the new generation of advanced helicopters.

Weighing at 1.7 tonnes, the helipcopter which is capable of ferrying four passengers, is equipped with advanced technology that simplifies operations, is safe and cost effective. — Bernama

Previous ArticleOver 100,000 metric tonnes of lost catch due to IUU fishing
Next Article Man gunned down at traffic light junction