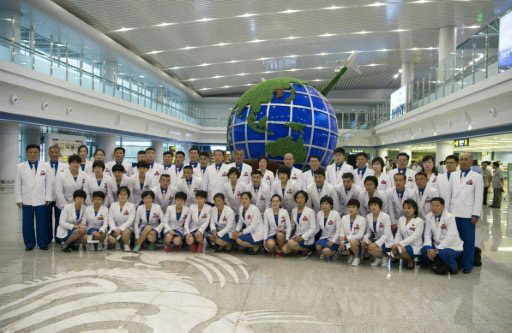 SEOUL: North Korea on Saturday sent a high-level delegation to attend the Rio Olympics, Pyongyang’s state media said, even as the country faces tough UN sanctions over its nuclear and missile development.

It remains unclear whether Choe, who currently doubles as the head of North Korea’s commission for physical culture and sports, would meet with any Chinese officials before heading to Brazil, Yonhap said.

For the isolated state, the Olympic Games offer a rare opportunity to take to the global stage and compete for applause rather than condemnation.

The North is reportedly sending some 30 athletes, with their best hope of medals coming in the weightlifting.

North Korea has competed in nine summer Olympics since Munich in 1972, but taken home only 14 gold medals.

The four golds it won in 2012 in London — three in weightlifting and one in judo — equalled its best-ever tally.

Since taking power following the death of his father Kim Jong-Il in late 2011, Kim Jong-Un has pushed for sporting progress with an at times militaristic fervour.

In an open letter to the nation’s athletes last year, Kim urged them to adopt “guerrilla-style” tactics to boost the nation’s underwhelming impact on the global sporting stage.

Lamenting the fact that North Korea was “trailing behind the world”, he promised to turn it into a sports powerhouse “within a few years.” -AFP